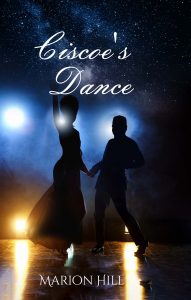 Ciscoe’s Dance is my fourth novel set in the fictional world of Kammbia and the first novel in the Dance & Listen Series.  However, this novel can be read as a standalone story. There is a quote attributed to the great author Toni Morrison, “If there’s a book that you want to read, but it hasn’t been written yet, then you must write it.”  Ciscoe’s Dance represents that quote for me.  I want to explore the symbiotic relationship amidst the two art forms and the universal appeal of them. There are not a lot of novels on the market that showcase the connection between music and dance. I hope Ciscoe’s Dance adds to the small number of stories featuring these art forms.

I had planned to write the fourth novel in Diondray’s Chronicles series and complete Diondray Azur’s story arc. However, I wrote Diondray’s Roundabout (the third book in the series) where Ciscoe and Latisha Maldonado first appeared. I knew I had to tell their story in a novel after writing that book. The story came instantly, and I had to trust my storytelling instincts to write it.

I wanted to thank all the reviewers and advance readers that gave Ciscoe’s Dance a chance. Many of them commented on the uniqueness of the story, the world building of the city of Walter’s Grove, and relationship between the characters especially the protagonist, Ciscoe Maldonado and his wife Latisha.  Also, his relationship with Delia Villanueva, the richest woman in the city. Some of you picked up on the various cultures represented in the book and appreciated how I created a multicultural perspective organically. That was my goal and I’m glad the readers recognized it.

In closing, I would like to share that November 23rd would have been my father’s 81st birthday.  I was going to release this novel in September but delayed the release until his birthday.  My father passed away seventeen years ago, and I never thought that I would write a story with him as a part of it.  For those of you who have already read Ciscoe’s Dance, Ciscoe makes a promise to his father, Gustavoe, to keep the tradition of Guanamamma music alive.  However, Piccanta music has arrived on the scene and has made Guanamamma music a thing of the past.  As much as I desired to write a story about tradition vs modernism and cultural appropriation, Ciscoe’s Dance is a story about son wanting to keep the connection to his father.  I did not expect that, but several reviewers and early readers noticed that too.  Most of all, my goal is to tell a good story and let readers escape into a world where music and dance are central to everyday life. If I have done that, then my job as a storyteller was achieved.

Ciscoe’s Dance can be purchased HERE.