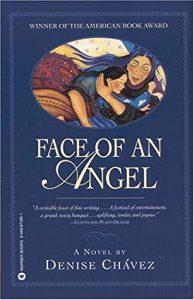 Rereading a novel can bring different expectations from when you first read it over twenty-five years ago.  This is the case with Face of An Angel by Denise Chavez.

Face of an Angel tells the story of Soveida Dosamantes, a waitress at El Farol Restaurant in the fictional New Mexican town of Agua Oscura.  Soveida shares her life growing up in Agua Oscura, revealing family history and secrets, struggling with her Catholic beliefs, and finding purpose as a waitress.

She traces her family history from Mexico and how they arrived in Agua Oscura. Soveida reveals an unflattering but honest portrayal of the family from grandparents, parents (she never calls them mom or dad but by their names, Luardo and Dolores), her brother Hector, and other extended family members. Also, she tells the story of her restaurant co-workers and they were just as colorful as her family.

As much as Soveida shares about the people in her life, she reveals much more about herself.  The failed marriages, the casual relationships, the missed opportunities to become something more than a waitress, and the connection to this little New Mexican town that she could never leave.

Face of an Angel reads more like a fictional memoir than a novel.  However, Soveida is a fictional character that I will never forget and rereading this novel brought her back to life in a way I did not expect.  I thought there would be much more laughter than sadness upon re-reading it.  This comment from the family’s housekeeper, Oralia brings home an important point. “Most stories are sad when you get to telling them, but anyway, what is life but stories?”  There are some hilarious moments, but Chavez shows how messy life can get through people’s choices.  This is a wise and humane novel.

Also, Chavez intertwined English and Spanish throughout the novel.  My Spanish is limited, but I recognized phrases like testudo como un chivo (Stubborn as an old goat), el prieto grenudo (the dark one), & ni lo mande dios (God forbid). These kinds of phrases added to the narrative flow and gave the story authenticity.

I enjoyed rereading Face of An Angel and the story of Soveida Dosamantes was as American as Holden Caulfield from The Catcher in the Rye, Scout Finch from To Kill A Mockingbird, or Bigger Thomas from Native Son.  This will be one of my favorite reads of 2020. Bravo Denise Chavez!

← Stuck on a Desert Island What 3 Authors Would You Read?
Wisdom From Kammbia Book Review 43: Finding Om by Rashmi Bismark →