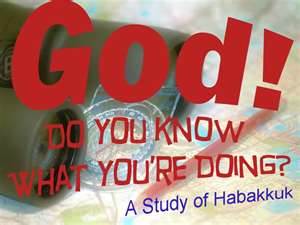 O Lord, how long shall I cry

for help and you will not hear?

Or cry to you Violence!

and you will not save?

Why do make me see iniquity,

and why do you idly look at wrong?

Destruction and violence are before me;

So the law is paralyzed,

and justice never goes forth.

For the wicked surround the righteous;

so justice goes forth perverted.

This was Habakkuk’s first complaint. It seemed to him that God was not answering his prayers to the wickedness and injustice he saw around him. Here’s what happened at that time to make the prophet cry out to God in this manner.

Josiah was the King of Judah and considered a righteous man in the eyes of the Lord and the people. The Book of the Law was recovered by the high priest, Hillkiah and read to the king.

After hearing the Law, the king tore his clothes and repented to God for his Judah’s unrighteousness. Then he decided to make a covenant with the Lord and made sure he and the people would follow the commandments for the rest of his days as king. Josiah got rid of the altars on the roof from a former king, the houses of male prostitutes, all the mediums and necromancers in Judah, and restore the Passover.

With all of that, you could have seen how the prophet was upset at God for not answering him. You had a righteous king that repented for Judah’s past and was reforming the nation to suit the Lord’s image. This should have pleased God and made him answer Habakkuk’s complaint immediately.

Well, Habakkuk fell into the trap that many of us who walk with Christ have fell into quite often. Because we are living a Godly lifestyle or doing everything that we believe what God wants us to do, then He must answer us right away when there’s trouble in our lives or when injustice is happening in a society.

“Before him there was no king like him, who turned to the Lord with all his heart and with all his soul and with all his might, according to all the Law of Moses, nor did any like him arise after him. Still the Lord did not turn from the burning of his great wrath, by which his anger was kindled against Judah, because of all the provocations with which Manasseh had provoked him.” (2 Kings 23:25-26 ESV Bible)

What Habakkuk didn’t realize was that God would recognize and honor King Josiah for his faithfulness and righteousness to Him. However, Judah still had to be judged for their unfaithfulness and immorality years before Josiah became king. The king’s reforms were needed and appreciated but the Lord had another plan to wed out Judah’s immorality and it had to be addressed.

Look among the nations, and see;

wonder and be astounded.

For I am doing a work in your days

that you would not believe if told

For behold, I am raising up the Chaldeans

that bitter and hasty nation

Who march through the breadth of the earth

to seize dwellings not their own

They are dreaded and fearsome;

Their justice and dignity go forth from themselves

Their horses are swifter than leopards,

More fierce then the evening wolves;

Their horsemen press proudly on.

Their horsemen come from afar;

They all come for violence,

All their faces forward.

At kings they scoff and at rulers they laugh.

They laugh at every fortress,

For they pile up earth and take it.

go on, guilty men, whose own might is their God!

There’s His answer in response to the prophet’s complaint. Instantly, we can recognize that God did not answer Habakkuk’s complaint, why directly? “He is sovereign. He does not need to explain or apologize for his actions.” (Everyman Bible Commentary: Habakkuk and Zephaniah by Cyril J. Barber)

That last sentence bothers both believers and non-believers. We want an explanation for something we don’t understand or something that happen we deem unfair or unjust. As a matter of fact, we will demand it.  However, God is sovereign and his ways are higher than ours and He doesn’t have to answer us if He doesn’t want to. I would recommend reading Job 38-42 to read God’s response to Job’s (another righteous man) complaint about the unfair treatment happening in his life.

Let’s be honest, we don’t like that kind of treatment from God or man.  When we see injustice there has to be reason or answer why its happening. We are considered the highest on the evolutionary food chain and things like this must meet our understanding before we can judge it to be right or not. Like I mention in the last post, I believe this action here is the biggest barrier for non-believers into becoming believers. If this God so good, why does he allow injustice or evil to reign free on a society?

Well, God does answer the prophet in verses 6-11. He’s raising up the Chaldeans (Babylonians) against Judah. God knows about their violent history and their evil ways. They just defeated the Assyrians and were coming for Judah. Also, He uses metaphors like swifter than leopards or more fierce then the evening wolves in response to Habakkuk to drive home the point on whom he’s dealing with.

What this first section of the study has said to me, that God will use anyone or anything to do his will. This theme is consistent throughout the Bible.

For example in the Old Testament, God uses Pharaoh’s hardness in the Book of Exodus to get him to free the Israelities from slavery.  God uses King Ahasuerus in the Book of Esther to keep him from wiping out the Jews in that kingdom thus preserving the bloodline where Jesus would descend from.  Over in the New Testament, there is the parable of Good Samaritan from the Book of Luke or Jesus speaking to the woman at the well from the Book of John.  There are many other examples in the Bible showing God using anybody for his purposes.

As Christians, we must come to grips with this reality.  There is no one out of God’s reach and He will use anyone to do his will.  Just because we are following Him and living our lives to reflect Him on Earth as best as we can doesn’t mean we will always understand what He’s doing or why He’s doing it. We have to trust in Him and truly understand his plan is better than ours.

As for non-believers, I know this still doesn’t meet your logic or reason sensors. However, I can write for myself that I was a non-believer for many years and critic of Christianity. I believed in Astrology, Numerology, and dabble with Taoism and thought I could be “spiritual without being religious” and I’m here to write that God has used to me too.  I’m not trying to convert to you all…but to let you know that if God wants to use you to do His will…He will.  I can testify to that.

I believe that this is first lesson we can learn from this opening section of Habakkuk. See you next week!

Here’s a question for you to think about until the next post:

1) Do you think God should use anyone or anything for His purposes?