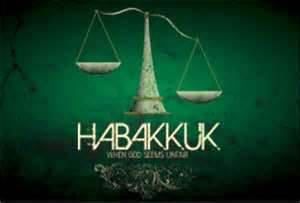 Are you from everlasting

O Lord my God, my Holy One

We shall not die

O Lord, you have ordained them as a judgment

And you, O’Rock have established them for reproof

You who are of purer eyes than to see evil

And cannot look at wrong

Why do you idly look at traitors

And remain silent when the wicked swallows up

The man more righteous than he;

You make mankind like the fish of the sea

He brings all of them up with a hook;

He drags them out with his net;

He gathers them in his dragnet;

So he rejoices and is glad

Therefore he sacrifices to his net

And makes offerings to his dragnet;

For by them he lives in luxury

And his food is rich.

Is he then to keep on emptying his net

I will take my stand at my watchpost

And station myself on the tower

And look to see what he will say to me

And what I will answer concerning my complaint.

The main key of Habakkuk’s second complaint is in verse 13 where the prophet writes, “You who are of purer eyes than to see evil and cannot look at wrong. Why do you idly look at traitors and remain silent when the wicked swallows up the man more righteous than he?” That verse shows the prophet’s (and our) misunderstanding of God and who he is. Because he is pure, because he is good, because he is righteous, and because he is everlasting, how could He let evil go unpunished and run rampant across the world.

This is where unbelievers decide to get off the train in believing in God. Also, this is where believers get confused and disheartened in their belief in Him. Well, I think this explanation on Habakkuk’s perspective is pertinent for this discussion:

Habakkuk reviewed his own belief in God as well as what God has just revealed to him. Because God was of purer eyes than to behold iniquity. Habakkuk failed to see how He could use a nation more wicked then Israel to chasten Israel. From a human perspective it appeared as if God were looking with favor upon those who dealt treacherously. (p. 34 from Everyman Bible Commentary, Habakkuk and Zephaniah by Cyril J. Barber)

God is letting evil get away in our society. God is letting the bad CEO get away scot-free with a severance package after ruining the company I worked for. God is letting my ex-husband or ex-wife get away with adultery as they start their new life with their mistress or paramour. God is letting our country go down the tubes because the people elected the wrong person as president. Well, our complaints like the prophet comes from a limited perspective and here’s the reason for that:

It seems in our culture, we want grace without judgment or we want love without correction. However that’s not consistent with how God operates. In both, the Old and New Testament shows God’s judgment and grace working together. And since reading Habakkuk, I’m seeing that we can’t have one without the other.

God responds to Habakkuk in verses 2:2-20, but for me the key in His response is this section:

Make it plain on tablets

So he may run who reads it

For still the vision awaits its appointed time

It hastens to the end–it will not lie

If it seems slow, wait for it

It will surely come; it will not delay

Behold, his soul is puffed up;

It is not upright with him,

but the righteous shall live by his faith.

God doesn’t answer the prophet’s complaint directly. But tells him to write the vision, wait for the appointed time, and if it seems slow believe it will come. That tells us God doesn’t want his people to wallow in self-pity or disappointment or even depression for a long time. He will lead to us to act.

Moreover, God does address the evildoers in his response. Using this phrase, His soul is puffed up means He was referring to Babylonian kingdom. Because they were a proud nation that relied on themselves instead of God, he gives the prophet a contrasting phrase, the righteous shall live by his faith.

Those of you who know their Bible should have recognized immediately where that phrase has appeared elsewhere in scripture.

Now it is evident that no one is justified before God by the Law, for the righteous shall live by faith. (Galatians 3:11 ESV Bible)

For by grace you have been saved through faith. And this is not your own doing; it is the gift of God. (Ephesians 2:8 ESV Bible)

But my righteous one shall live by faith, and if he shrinks back, my soul has no pleasure in him. But we are not of those who shrink back and are destroyed, but of those who have faith and preserve their souls. (Hebrews 10:38-39 ESV Bible)

All those scriptures from the New Testament point back to that verse in Habakkuk. It shows this obscure and overlooked book in the Bible laid out one of the bedrock themes of Paul’s ministry and is preached by many pastors in our churches today.

In closing, I believe this passage will sum it up:

The truth contained in Habakkuk 2:4 was designed to bring comfort to believers. It showed that faith in God was the key to consistent living, even though violence abounded and justice was perverted. Today that short statement helps believers to persevere even though God chastens them and they cannot understand His ways. It provides a solution to the doubt they sometimes feel in His all-wise providence and helps them to understand his righteous judgments. In the final analysis, faith provides the key to understanding the Lord’s sovereign purpose, and it leads men to worship. (p. 39 from Everyman Bible Commentary, Habakkuk and Zephaniah by Cyril J. Barber)

That’s right on.  See you next week!

Here’s a question to think about until next week’s post:

1) What does it mean to you that righteous shall live by the faith?  (Review the New Testament Scriptures alongside Habakkuk 2:4 as a starting place.)