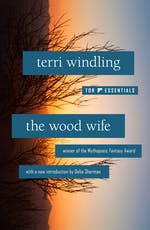 In my previous post, I decided to give myself a reading challenge where I will read the books on my physical and digital shelves for this year.  The goal of this reading challenge is to read more of what I already have instead getting something new. Also, I hope to discover some great reads that I had an initial excitement for when I first bought them but got replaced by the latest purchase to get that excitement all over again.

Well, I’m off to good start on my reading challenge with The Wood Wife by Terri Windling.  This novel has been on my main bookshelf for over a year and I have known about the book since it was published in 1996. Windling has been an editor for one of my favorite writers, Charles de Lint, for many years and when I heard she had written a novel of her own that got my interest.

The Wood Wife told the story of a writer named Maggie Black who inherited the Tucson AZ estate of a reclusive poet named Davis Cooper. Maggie just ended her marriage to a famous musician and was looking to start her life over by writing the biography about the poet’s life.  She started to learn the nature of the poet‘s death through the people that lived on various parts of the estate.  Also, Maggie discovered through the poet’s letters about his lover, Anna Naverra, a gifted painter and the visions she saw through her art.  Those visions drove the painter into madness about how real they became and their connection to the environment in Tucson. Maggie elicited help when another painter who lived on the estate named Juan heads into a similar fate that befell Anna Naverra.  Will Maggie and her new friends be able to stop Juan from following the same path as Anna?

Windling draws upon various mythologies to tell a story about how the power of art, how it can drive one into madness if not channeled properly.  Also, this is a story about new beginnings in a place off the beaten path and how a renewal of life can start where you would have never visited before fate intervened. The Wood Wife is an intelligent, thoughtful, and mature fantasy novel that should get more recognition. Tor Books has repackaged the novel in its Tor Essentials edition and rightly so.  The Wood Wife should be an essential read for fantasy literature fans and an entry point for non-fantasy readers too.