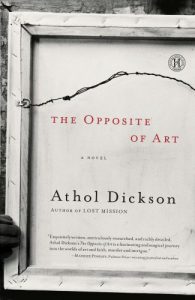 The Opposite of Art is the story of the genius artist, Sheridan Ridler, who is known for painting nudes without faces. Ridler gets quite a reputation in the art world as a cad to the ladies and an arrogant jerk to everyone else that comes in contact with him.

Well, he has an accident at the Harlem River and that begins his spiritual transformation. However, the art world thinks the great artist is dead and Ridler’s paintings are worth millions. But there are reports that he’s alive and his daughter (whom he never met) from one of his models decides to search for him.

Because of her search, the daughter attracts another individual from Ridler’s past who wants to make sure the great artist is dead and if not, stay dead.

In lesser hands, a story like this could have fallen victim to stereotypes and the spiritual transformation would have been a “Come to Jesus Moment and Now I Have A Get Out of Hell Free Card.” However, Dickson creates a story of intrigue, love, murder, family relationships, and the collision of art and faith. He goes beyond the stereotypes to produce a novel that has depth and reveals the honest struggles of someone trying to come to terms with their spiritual conversion.

Because of those elements, Dickson has become a writer I have wanted to read regularly.  He seems to understand that being a believer is not just about saying the sinner’s prayer, attending at church once a week, and singing Jesus loves and forgives me songs. A spiritual conversion affects every area of our lives and this type of fiction should reflect that and not simplify it for mass consumption.

In the Dickson novels I’ve reviewed, he has given the Christian Fiction genre a fresh and honest perspective of what these types of novels should look like and he deserves to be mentioned with writers that preceded him like Walker Percy, Flannery O’Connor, and Graham Greene who expanded the genre’s boundaries as well.

The Opposite of Art should be a must read for all serious readers and is one of the best novels I’ve read since I started this blog in 2011.

Podcasts have become my other favorite platform for content alongside books.  I can listen to a podcast on various subjects and the long form interview from 30 minutes up to 2 hours is an excellent way to go deep on a topic. The Dave Chang Show is one of my favorite podcasts and a regular… END_OF_DOCUMENT_TOKEN_TO_BE_REPLACED

I have mentioned in several blog posts over the years that Charles de Lint is one of my favorite authors.  I read a few of his novels in the early to mid-1990s when he was the big name in fantasy fiction. His contemporary fantasy novels and short… END_OF_DOCUMENT_TOKEN_TO_BE_REPLACED

It has always fascinated me on what makes art sells over the long term.  Whether Star Wars from Film, Harry Potter from Books, Michael Jackson’s Thriller from Music, or Seinfeld from TV, it’s been interesting to see what makes the public connect with certain artistic works over the years. I have read plenty of internet… END_OF_DOCUMENT_TOKEN_TO_BE_REPLACED

Is it possible to succeed as an artist and entrepreneur? Elizabeth Hyde Stevens examines this question in her book, Make Art Make Money, about how Jim Henson navigated the parallel worlds of art and business to become one of the greatest American artist-entrepreneurs. Make Art Make Money explores how this gentle man had an innate… END_OF_DOCUMENT_TOKEN_TO_BE_REPLACED

One of the pleasures of doing book reviews is getting to discover a new author and escaping into their fictional world. I have been hearing about mystery novelist Louise Penny on the What I Should Read Next podcast by several readers.  Anne Bogel, the host, recommended Penny to several of her podcast guests. I decided… END_OF_DOCUMENT_TOKEN_TO_BE_REPLACED