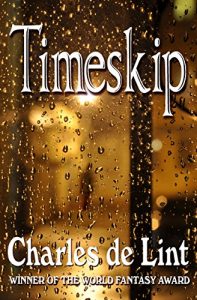 Charles de Lint is one of the few authors I have read for over twenty-five years. His novels and stories set in the fictional city of Newford have been delightful to read for a long time. Timeskip is one of de Lint’s best and well-known stories about a ghost appearing every time it rains. A young woman named Sam notices the ghost on a regular basis and  wants to connect with it.

Sam convinces her new boyfriend Geordie that a ghost really exists and he should help her in creating a connection. They summon up the courage to meet the ghost as he appears again in a downtrodden section of the city. However, when she begins talking to the ghost and starting a connection, Sam learns that it comes with a price. The ending of the story was touching and powerful. Timeskip is a story I will return to in the future.

This story can be read as a standalone or how I read it in de Lint’s Dreams Underfoot collection.