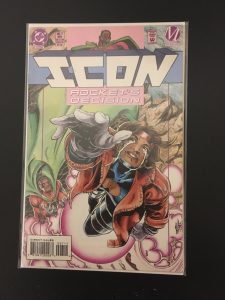 Will Rocket have the baby?

Will she get an abortion?

Those are the main questions from Issue 7.  Rocket is weighing the decision to go through with the pregnancy or get an abortion. This one of the most difficult decisions that any woman has to make especially a teenager like Rocket.  Writer Dwayne McDuffie handles (for a man) it quite well and with sensitivity.

Also, Rocket begins to learn about Icon’s past as a brother from another planet.  However, she does not believe his origin story.  Icon tells her that he is over hundred thirty years old and shares more about himself than in the previous six issues.

She is still skeptical about his past but decides to ask him for a loan in order to get an abortion.  Icon reveals a story about his wife and what happened when she got pregnant.  Rocket is surprised by that story and reacts like any hot-headed teenager would.

Icon #7 is my favorite issue so far on this re-read. I don’t remember any comic book series from the early 1990s tackling a subject like abortion especially from an African American perspective.  It shows how imaginative fiction can deal with a realistic subject in a positive and life-affirming way.  Rocket does make her decision by the end of the story but she will begin to learn the ramifications of that decision going forward.

Icon continues his battle with Blood Syndicate and they finally come to a truce after he explains that his mission on the island is to investigate what happened during the Big Bang Incident.  Rocket comes to help her partner and learns that Icon is more than capable of handling himself. He scolds Rocket for coming… END_OF_DOCUMENT_TOKEN_TO_BE_REPLACED

Issue 5 picks up from where Issue 4 left off.  Icon fights Blood Syndicate, the superhuman group that protects the island near the city of Dakota.  The group believes Icon works for the Mayor and wants to cause more problems on the island.  Icon explains he is investigating what happened on the island with the… END_OF_DOCUMENT_TOKEN_TO_BE_REPLACED

Icon tells Rocket she is pregnant. Rocket can’t believe it but decides to take an over-the-counter pregnancy test to make sure.  As readers, we all know what the answer will be. Rocket sees her life flash before her eyes as she talks with her best friend about it how could happen. Meanwhile, Icon continues on… END_OF_DOCUMENT_TOKEN_TO_BE_REPLACED

Issue 3 continued from what happened in Issue 2. The Mayor of Dakota was held hostage by someone she had a connection too and the abductor wanted her to accept responsibility for causing an event to happen at a nearby island. Police stopped Icon and Rocket momentarily from entering city hall, but they could finally… END_OF_DOCUMENT_TOKEN_TO_BE_REPLACED

The Mayor of Dakota, Thomasina Jefferson, is being held hostage at city hall.  The police commissioner calls in S.H.R.E.D, the city’s most elite police unit.  They hold Icon and Rocket at gunpoint. Icon wants to comply with the police officers and Rocket reminds him of his social status despite being able to defeat the entire… END_OF_DOCUMENT_TOKEN_TO_BE_REPLACED

In 1839, an alien spaceship approaches Earth.   A pod from that spaceship is ejected and heads toward the planet.   It lands in a field and creates an explosion.  A slave woman notices the pod and finds a little black boy inside.  The little boy is Augustus Freeman and his life on earth begins. Fast forward… END_OF_DOCUMENT_TOKEN_TO_BE_REPLACED

I grew up reading comic books and they became my first entry point into becoming a lifelong reader.  I don’t think I would have ever become a regular reader of prose fiction without my time as a comic book reader.  One of my favorite comic books I read in my early 20’s was Icon from… END_OF_DOCUMENT_TOKEN_TO_BE_REPLACED