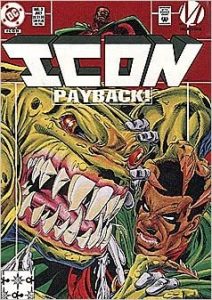 Issue 3 continued from what happened in Issue 2. The Mayor of Dakota was held hostage by someone she had a connection too and the abductor wanted her to accept responsibility for causing an event to happen at a nearby island. Police stopped Icon and Rocket momentarily from entering city hall, but they could finally get past them and free the mayor.

The abductor changed from human to monster and fought Icon and Rocket. It surprised Icon that the monster penetrated his superhuman skin and made him bleed. He wanted Rocket to stay in contact with the monster but not engage him. However, she ignored Icon’s request and took matters into her own hands.

Meanwhile, Icon stopped another person from attempting to abduct the mayor and took care of the interloper easily. He brings the mayor to safety, and a crowd outside of city hall applauded the heroism.

This issue referred to an event that altered the city of Dakota in a major way. Will Icon be able to find what really happened on that island? Did the monster make a credible point about the mayor wanting to appear tough on crime and causing a bigger problem? That’s not unusual for a politician. Icon told Rocket about a life-altering event that will be revealed in the next issue. I’m looking forward to see how Rocket handles it.