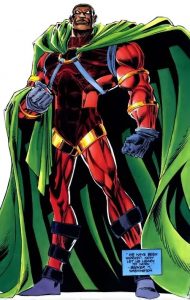 I grew up reading comic books and they became my first entry point into becoming a lifelong reader.  I don’t think I would have ever become a regular reader of prose fiction without my time as a comic book reader.  One of my favorite comic books I read in my early 20’s was Icon from Milestone Comics.

In the early 1990s, the comic book industry began to expand beyond the Big 2 (Marvel & DC) and were looking for new stories to tell.  It was an appropriate time for comics to have a little diversity too.  Milestone Comics released four new titles as a black-owned independent company with the backing of DC Comics as a distributor.  I worked for Capital City Comics, a comic book distributor, in the early 1990s when I lived in Atlanta.  I remembered seeing those four Milestone tiles:  Icon, Hardware, Static, and Blood Syndicate and got excited.   Finally, the comic book medium (outside of Storm, Black Panther, and Luke Cage) had opened up to include more BIPOC heroes.   Milestone Comics lasted only a few years but still has left a mark on comic book industry nearly three decades later.

Icon was my favorite Milestone title.  Unfortunately, the character got immediately labeled Black Superman and never garnered the respect it rightly deserved from comic book readers.  However, it was first time as a reader I saw contemporary issues from a black perspective addressed.   Conservatism vs Liberalism (Booker T. Washington vs W.E.B Dubois debate), teenage pregnancy, abortion, does one group of the human family need a savior, and what does it mean to be a hero?  I appreciated the late Dwyane McDuffie’s attempt to answer life’s biggest questions from a black perspective.  We have a perspective on these things just as much as the white establishment.

Well, I have decided to re-read the entire Icon series again along with my regular reading of prose fiction this year.  It has been awhile since I have read a comic book series.  But, I have learned over the years that great storytelling can come from any artistic medium.  You just have to be open to it and let the power of story do its job.

It will be interesting to see if I have the same observations as a middle-aged man reading Icon as I did in my early 20s.  I will state this in closing…..the vehicle of imaginative fiction (I include fantasy, science-fiction, horror, and comic books in that definition) as a lens to highlight contemporary life started here for me.  And it is always good to return back to where it started.