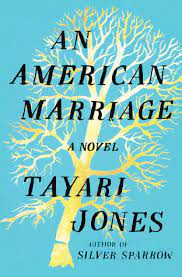 If your spouse was wrongly accused of rape and went to prison for five years but gets released, would you remain married?

That was the question An American Marriage by Tayari Jones attempted to answer in her popular novel.  An American Marriage was selected for Oprah’s Book Club in 2018 and has been a favorite for readers on social media. I had seen many posts about the book over the past couple of years and I finally read it.

The story revolves around newlyweds Celestial and Roy Hamilton and their life in Atlanta. At first, their marriage begins on solid footing and looks promising.  However, when Roy returns to his hometown in Louisiana to visit his parents, everything changes.

Roy gets out of prison five years later and is determined to rekindle his marriage to Celestial. However, she has become lukewarm during his prison time and has a connection to her childhood best friend, Andre.  Eventually, Roy finds out about their connection and returns to Atlanta to confront them.  On the surface, it seems obvious what will happen between the three of them.  Jones does a solid job in showing how a husband would react when he believes his wife is slipping away from him.  I will admit that I did not like Celestial’s choice.  But, I know how love can be complicated and there was no guarantee that Roy would ever be released from prison.

Jones did an exceptional job in showing the connection between fathers and sons.  Roy and Andre’s relationships with their fathers caught my attention, and this subplot added a depth to the novel I did not expect. I thought Roy was the most fully rounded character in the book, and I rooted for him the entire time.

I’m delighted that I finally read this well-received and popular novel. Jones showed how love is fleeting and could change because of life’s circumstances. An American Marriage was a readable, character-driven novel that has movie potential and could be a book club favorite.  It will be one of my favorite reads of 2021.