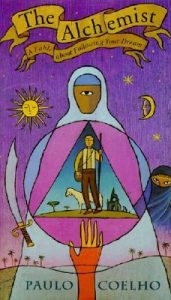 I spent a couple of hours last night reading this beloved book. The Alchemist told the story of Santiago, an Andalusian boy who travels to Egypt in search of his destiny. On the surface, it read as a simple story of the hero’s journey told in a different package. However, Coelho mixed various faith and belief systems to add a different layer to this well-told trope.

While, I enjoyed reading this book (It was more like a fable than a novel) and found some nuggets of wisdom like this one:

“The closer he got to the realization of his dream, the more difficult things became. It seemed as if what the old king had called beginner’s luck were no longer functioning. In his pursuit of the dream, he was being constantly subjected to tests of his persistence and courage. So he could not be hasty nor impatient. If he pushed forward impulsively, he would fail to see the signs and omens left by God along his path.”

I get that nugget of wisdom on an intellectual level. But, I have to write the book was not as life changing as I thought before I started reading it. However, I’m glad that I finally read The Alchemist and Santiago’s story has wise things to say about pursing your destiny.  I believe this book will appeal to those who claim to be more spiritual than religious.  Those who are dogmatic or deep in their religious beliefs might have a problem with the syncretism that Coelho does in the book. It will be interesting to see how closely the upcoming movie aligns with the book or tells its own story about Santiago’s journey to his destiny.

Seth Godin is becoming one of my favorite public thinkers. I read his blog daily and listen to his podcast, Akimbo, as often I can.  Also, I have read several of his books like Tribes, Permission Marketing, and This Is Marketing.  He’s had a pulse on the business world for over three decades. His latest… END_OF_DOCUMENT_TOKEN_TO_BE_REPLACED

Coronavirus AKA COVID-19 has taken over everybody’s lives these days and created a global pandemic.  However, I believe this is an opportunity to read some good books…uplifting books to keep our minds occupied with something over than this virus.  Here are five books I’ve read… END_OF_DOCUMENT_TOKEN_TO_BE_REPLACED

One of the joys of reading is discovering a book (or author) you would have never come across in your normal reading experience. I will confess upfront that I’m not that much of a fan of YA novels. Reading about teenagers (or young adults) and their problems or issues does not move me as a… END_OF_DOCUMENT_TOKEN_TO_BE_REPLACED

A themily is a collection of thoughts written on a single sheet of paper that were meant to inspire, encourage, or admonish the audience. Diondray Azur, the main character in the Kammbia novels, writes themilys and performs them throughout his journey in Kammbia.  These blog posts will share the themilys he has written from… END_OF_DOCUMENT_TOKEN_TO_BE_REPLACED

“Nice things happen to good people.” That quote sums up my feelings about My Mrs. Brown by William Norwich. This is the story of an elegant, elderly cleaning woman named Emilia Brown, who has a dream of buying an expensive Oscar de la Renta dress. Mrs. Brown, who has a lived an honest and dutiful… END_OF_DOCUMENT_TOKEN_TO_BE_REPLACED

I have always been a believer in the importance of imagination in every aspect of our lives.  Especially when it comes to creativity and the arts.  I have been trying to find the proper definition of imagination and I believe I found it from this passage by Michael Card: “The imagination is the bridge between… END_OF_DOCUMENT_TOKEN_TO_BE_REPLACED

–The life of an Essentialist is a life lived without regret. If you have correctly identified what really matters, if you invest your time and energy in it, then it is difficult to regret the choices you make. You become proud of the life you have chosen to live. That paragraph from page 237, near… END_OF_DOCUMENT_TOKEN_TO_BE_REPLACED

It has been awhile since I wrote a blog post. However, I was asked recently by a close friend a question. I have thought about their question for several days and decided to write a blog post.  Here’s the question: Why Do I Write?  Why I Write for 3 reasons: 1) I want the Kammbia… END_OF_DOCUMENT_TOKEN_TO_BE_REPLACED