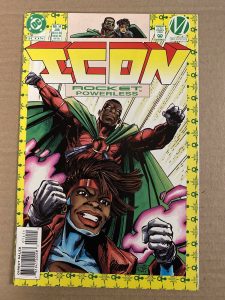 Rocket learns a valuable lesson with the responsibility she has as a superhero and being Icon’s partner.

She asks Icon to attend a community event, but he cannot attend because his day job as a lawyer demands his attention.  Rocket is frustrated with his duties as a lawyer and they have an argument when Icon suggests she has a conversation with her mother about the pregnancy.  Meanwhile, there is a small-time gangster who notices Rocket’s belt as a power source and the thing he needs to become the baddest criminal in the city of Dakota.  The gangster meets up with Rocket to steal her belt and uses its power to wreak havoc.

Icon finds out the criminal’s path of destruction on television, and he goes to confront him. A battle ensues and the superhero takes care of business.  Icon admonishes Rocket for her careless behavior in a father-to-daughter like conversation. Rocket realizes the error of her ways and is determined to be more responsible.

On the surface, this would seem to be a simple story of a small-time criminal wanting to have power.  But the story reveals the irresponsibility and abuses that having power can bring.  Onto Issue 15.

Buck Wild is on the scene! He is taking names and delivering punishment to anyone that stands in his way in the city of Dakota. However, he is under the spell of Lysistrata Jones and her magical whip.  Buck Wild can not resist her control over him.  As a result, she has her muscle bound… END_OF_DOCUMENT_TOKEN_TO_BE_REPLACED

“Don’t forget, you’re a full-time student and a part-time superhero.” Icon told Rocket the aforementioned sentence at the beginning of Issue 12 while they were saving someone from being robbed.  Rocket has been trying to manage her life of high school student, superhero, and pending motherhood.  One of her good friends, Josie, came to school… END_OF_DOCUMENT_TOKEN_TO_BE_REPLACED

A fourth-grader named Todd Loomis wrote a paper for his class about what he did on his Christmas vacation break. He got to see Icon and Rocket in action as they took down some criminal gun dealers.  The gun dealers were trying flood the city of Dakota with guns and control the city.  Todd saw… END_OF_DOCUMENT_TOKEN_TO_BE_REPLACED

Rocket apologizes to Icon for connecting with Holocaust.  She learns that Holocaust wants to control the city of Dakota.  Icon confronts Holocaust and two dialogue about the role of the Big Bang and how it has affected the city. That dialogue leads to a confrontation revealing who is the best between the two. Also, Rocket… END_OF_DOCUMENT_TOKEN_TO_BE_REPLACED

My goal is to re-read and review the entire forty-two issue run of Icon that was published by Milestone Media in conjunction with DC Comics from 1993-1997. I have read the first story arc of eight issues that set-up the origin of Icon and his teenage sidekick, Rocket.  Issue 9 begins a crossover series called… END_OF_DOCUMENT_TOKEN_TO_BE_REPLACED

Independent filmmaker John Sayles released Brother From Another Planet back in 1984.  The movie tells the story of a visitor from outer space played by the great actor Joe Morton, who looks like a black man. He arrives on Earth in a spaceship that looks like it is something from the 1950s sci-fi stories by… END_OF_DOCUMENT_TOKEN_TO_BE_REPLACED

Will Rocket have the baby? Will she get an abortion?  Those are the main questions from Issue 7.  Rocket is weighing the decision to go through with the pregnancy or get an abortion. This one of the most difficult decisions that any woman has to make especially a teenager like Rocket.  Writer Dwayne McDuffie handles… END_OF_DOCUMENT_TOKEN_TO_BE_REPLACED

Icon continues his battle with Blood Syndicate and they finally come to a truce after he explains that his mission on the island is to investigate what happened during the Big Bang Incident.  Rocket comes to help her partner and learns that Icon is more than capable of handling himself. He scolds Rocket for coming… END_OF_DOCUMENT_TOKEN_TO_BE_REPLACED

Icon tells Rocket she is pregnant. Rocket can’t believe it but decides to take an over-the-counter pregnancy test to make sure.  As readers, we all know what the answer will be. Rocket sees her life flash before her eyes as she talks with her best friend about it how could happen. Meanwhile, Icon continues on… END_OF_DOCUMENT_TOKEN_TO_BE_REPLACED