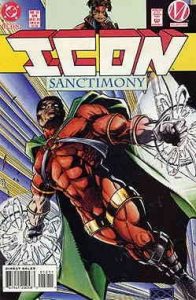 “Don’t forget, you’re a full-time student and a part-time superhero.”

Icon told Rocket the aforementioned sentence at the beginning of Issue 12 while they were saving someone from being robbed.  Rocket has been trying to manage her life of high school student, superhero, and pending motherhood.  One of her good friends, Josie, came to school with a black eye.  Rocket found out about her friend’s pregnancy and why she does not want to keep her baby because of her abusive boyfriend.

Meanwhile, a religious group named Gideon’s Cord has been protesting at Planned Motherhood Clinics throughout the city of Dakota. They were determined “by any means necessary” to stop women from having abortions.  Rocket has offered protection to her friend as she goes to the clinic to make an appointment. Icon learned that Gideon’s Cord might have taken their anti-abortion beliefs to the extreme, as they were connected in bringing illegal guns to the city.

Josie’s boyfriend arrives at the clinic to keep her from going through with the abortion.  However, Rocket defeats him easily and saves the clinic from being blown-up.  Icon arrives a fraction later and shares a warm moment with his partner.

Issue 12 deals head on with the sensitive (and politically charged) topic of abortion.  The power of story (when it’s done right) can provide a different perspective on this type of issue. My personal views fall in line with the sanctity of life, but the purpose of art (in this case, from a superhero comic book) is to look at it from someone’s perspective.  Compassion and understanding are needed even if you don’t agree with someone’s choice.

The latest issue gives readers some actual food for thought and an example of how the power of story can provide a way of dealing with a controversial topic without taking sides.  Well done!