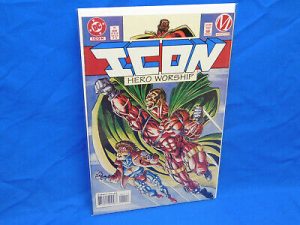 A fourth-grader named Todd Loomis wrote a paper for his class about what he did on his Christmas vacation break. He got to see Icon and Rocket in action as they took down some criminal gun dealers.  The gun dealers were trying flood the city of Dakota with guns and control the city.  Todd saw the entire interaction and began to imagine his own possibilities of becoming a superhero like Icon and Rocket.

He makes his own cape and pretends that he can take on the bad guys like his favorite superheroes.  Of course, he is a child and the adults in his family and the neighborhood see it as a typical thing that children will do.  However, Todd notices where the gun dealers have been storing their guns and wants to let Icon and Rocket know about it.  But, how can he find them?

Meanwhile, Icon and Rocket have a philosophical discussion about their efforts in rounding up the criminals is truly making a difference. Their discussion is one of the reasons I have enjoyed re-reading the series.  Rocket is not afraid to challenge Icon’s perspective about inner city life.  Icon does take her comments seriously, but this time gives her some food for thought on what it means to be a superhero.

Todd’s curiosity leads him where the bad guys are and nearly gets him in deep trouble until Icon and Rocket save the day. Icon appreciates Todd’s efforts and learns a lesson in heroism. Todd finishes sharing his paper with the class and is beaming with pride.

I have to write that issue has become the favorite on my re-reading of the series so far.  Not only, does it show the importance of representation from a symbolic and paradigm shifting viewpoint.  Moreover, it celebrates how childlike curiosity can give someone hope for a better life. Bravo!