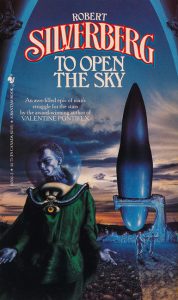 Of course, we all know the answer to that question.  One death per person.  However, science fiction has tackled the immortality theme throughout its history as a genre and Robert Silverberg addresses it in several of his books during his most prolific period of 1967-1976.

To Open The Sky presents a scenario where Earth’s survival is hanging on by a thread. The planet is overpopulated and needs a miracle to continue surviving. Noel Vorst, leader of a religious science cult, believes they have found the means for immortality.  His group, the Vorsters, want to provide this miracle to create everlasting peace and order. However, Vorst’s plan had not been able to come to fruition until an interaction with a rival cult changes everything.  Vorst’s plan transforms into something that believers of both cults did not expect.

Silverberg has shown a willingness to include religious themes (mostly from Christianity and Judaism) throughout these books from his most prolific period.  To Open The Sky continues in that same vein.  What I have appreciated about Silverberg’s engagement with religious ideas in his science fiction is that he takes it seriously and does not pander or fall into lazy stereotypes regarding religiosity.

To Open The Sky is not my favorite of the Silverberg novels I have read so far.  But, I appreciate his attempts to add depth in these pulp sci-fi novels. It shows that you do not need to write five or six hundred pages to have an intelligent and engaging narrative. I would recommend To Open The Sky for those readers who are Silverberg fans but not newcomers to his work.  I would rather newcomers try Downward to the Earth, A Time of Changes, or Dying Inside before this novel.