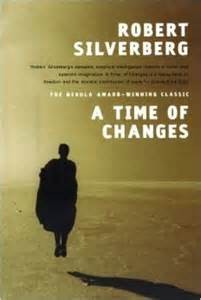 What is the strength or conviction of someone’s beliefs unless they are tested by temptation?

The Nebula Award winning novel A Time of Changes by Robert Silverberg attempts to answer the aforementioned question.  Prince Kinnall from the planet Velada Borthan tells his story as a memoir about how he became tempted by a substance brought by a man from Earth named Schweiz. That temptation makes him questioned his religious beliefs and changes his life forever.

The substance that the Earthman brought gives a person the ability to look deep into one’s soul as well as the other person who is taking with you.  Since this novel was published in 1971, I could see Silverberg being influenced by the drug and hippie culture of that time and decides to put that aspect into this story.  However, self-bearing or saying something that starts with ‘I’ is taboo and even considered a criminal act in the culture that Prince Kinnall belongs to.

I found that custom to be one of the most fascinating aspects of the novel and one of the fundamental questions that all believers of any religion have to wrestle with.  I was reminded of these words from Jesus in the Book of Matthew, “For whoever would save his life will lose it, but whoever loses his life for my sake will find it.“  {Matthew 16:25 ESV Bible}  If you are a believer (especially in the Big 3 religions of Western Culture: Christianity, Judaism, & Islam), do you give up your autonomy as a human being in order to follow God?

Silverberg uses the secular lens of science fiction to look at that fundamental question.  As a Christian, I would disagree with his method of using a substance as a possible answer for that question.  However, I can appreciate the honesty reflected through Prince Kinnall’s choice and his inevitable outcome.

A Time of Changes will be one of my best reads in 2015. I will admit that novels like The Sparrow, The Book of Strange of New Things, Parable of the Sower, and The Child Goddess along with this one have become my favorite genre of fiction where science fiction and fantasy concepts intertwine with religious beliefs.  Even though, I believe that A Time of Changes will seem dated to some readers, I will highly recommend reading the novel. I can see why it won a Nebula award in 1972.