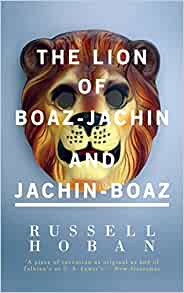 Sometimes a book will come out of nowhere for you to read it?

The Lion of Boaz-Jachin and Jachin-Boaz by Russell Hoban is a such book. I’ve had this book on my Kindle Paperwhite for awhile and I finally decided to read it while on vacation in Europe last week.  I did not plan to read this book, but once I started I could not put it down until I finished.

It is the story about Jachin-Boaz, a middle-aged mapmaker, who has reached a mid-life crisis.  His life has not gone the way he had imagined and decides to leave his wife and son to find it.  However, Jachin-Boaz encounters a lion on his travels that is meant to represent what he has been truly missing in his life.

His son, Boaz-Jachin, decides to search for his father and find out why he has abandoned his family. The son discovers on the journey his own dissatisfaction with life and realizes his father had a lot to do with it.

I will admit that I was not sure what to make of this book once the conclusion had been reached.  Hoban wrote an engaging and odd story that kept me interested. But, I did not fully get his meaning about a man having to search for his lion. Was the lion a figment one’s imagination?  Was it to represent man’s yearning to be free is more important than being a responsible citizen?  I really do not know.

The Lion of Boaz-Jachin and Jachin-Boaz is one of the books you come across at random and sucks you in for an interesting reading experience.  But, I wanted more from the book and found that Jachin-Boaz’s estranged wife was the most interesting character in the novel.  I wished her story could have been explored further.