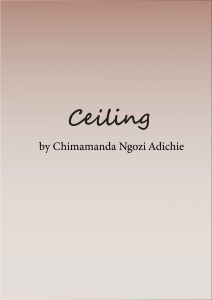 Chimamanda Ngozi Adichie has been a writer that I’ve wanted to read for quite some time.  I’ve had her novel, Americanah, in my Kindle library since 2020.  Moreover, I have seen her other books like Half of a Yellow Sun, Purple Hibiscus, & We Should All Be Feminists on my social media feeds for just as long.  She has been a favorite for many readers and I finally found an entry point into her work with the short story, Ceiling.

Ceiling originally appeared in Granta Magazine in 2011 and was included in the Best American Short Stories series for the same year that was edited by Geraldine Brooks. Adichie told the story of an Nigerian man named Obinze who received an email from a prior girlfriend who has made a life for herself in America. Obinze reflected on their relationship and began pondering about what could have been if he had stayed with her instead of his current life as a wealthy man with a wife in Lagos.

The story examined contemporary Nigerian life as well as the choices a person makes when they return to their birthplace. Adichie revealed the tension between the past and the present quite well. Also, she laid out the dissatisfaction that life can bring even if you have everything that society deemed as being successful.

I could appreciate the story on several levels and it was nice to read about how modern life can create its own walls when you have achieved everything you needed it to make something of yourself.  The power of the past and how our imagination can make someone long for something that was outside of those societal norms.

Adichie writes an excellent story in black life that doesn’t get much attention from my perspective. I’m glad this was my introduction into her work and I’m looking forward to finally reading Americanah. Ceiling is a well-crated short story and recommended for fans of her work.

← What Modern Classic Would You Like To Rewrite?
Wisdom From Kammbia Review 97: The Haunting of Tram Car 015 by P. Djeli Clark →