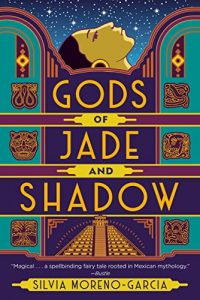 I’ve had my eye on Silvia Moreno-Garcia’s work over the past several years. I downloaded her first novel, Signal to Noise, on my Kindle a couple of years ago and her fourth novel, Mexican Gothic, I have seen throughout social media recently.  Moreno-Garcia’s work has been popular for some time.

Gods of Jade and Shadow tell the story of Casiopea Tun, a young woman from Southern Mexico who dreams of a better life. Casiopea is beholden to her overbearing grandfather and ridiculed by her vain cousin, Martin as they try to keep her in line.  However, she discovers a wooden box in her grandfather’s room and opens it.  Casiopea frees the spirit of a Mayan god named Hun-Kame.  The god requests Casiopea’s help in returning him to his throne in the land of Xibalba. Hun-Kame’s brother, Vucub-Kame, occupies the throne and is determined to keep it at all costs.

Casiopea travels with Hun-Kame across Mexico as they attempt to regain the lost elements that will restore him to the throne. But, Vucub-Kame has placed traps along their journey to keep his brother from regaining his rightful place. The journey ends with Casiopea having to face her cousin while the gods watch them.  Even though Moreno-Garcia draws on Mayan mythology and folklore to tell the story, I believe this novel is really about family relationships and one’s place within a family structure. Also, the story is about a young woman’s longing into becoming the person she is meant to be.

I totally enjoyed reading this novel and Moreno-Garcia told a good story.  I liked the relationship between Casiopea and Hun-Kame.  The two had a genuine connection despite the fate that would befall each of them.  Gods of Jade and Shadow has leaped on to my favorite reads list of 2021.  Bravo Silvia Moreno-Garcia!