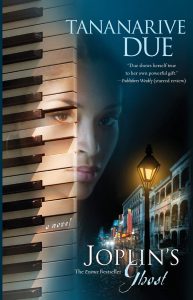 As a reader, you notice what kinds of books that you keep gravitating towards. Even though I’m an eclectic reader, I keep gravitating recently towards novels that are about the creative process (books, art, food, or music).  Human creativity has always been fascinating to me, because it showcases the power of imagination in interesting and unexpected ways.

Joplin’s Ghost by Tananarive Due presents creativity as a theme in the form of upcoming R&B singer, Phoenix Smalls. Phoenix is on the verge of stardom and recently got signed to rapper-entrepreneur G-Ronn’s Three Strikes Records.  Throughout the novel, I thought of Phoenix as the late Aaliyah and G-Ronn as Master P of No Limit Records.

The story begins with Phoenix as a ten-year-old at her parents’ jazz club. She dreams of becoming of singer like Janet Jackson or Madonna.  Phoenix’s hard-charging father, Marcus “Sarge” Smalls bought her a piano, and she wanted to go play something on it.  However, Phoenix’s life would change after the accident with that piano.

The novel moves forward to Phoenix’s current life on a radio tour in St. Louis promoting her hit song, Party Patrol. Party Patrol is a summer dance hit but Phoenix is ambivalent about the song’s success.  To get her mind off it, she goes to the Scott Joplin Museum to kill some time and learn some musical history.  Joplin is known as the “King of Ragtime” music and one of America’s greatest musicians.  While touring the museum, there is a mysterious presence that connects with Phoenix.  That mysterious presence will become a part of Phoenix’s life from now on.

Due takes the story back to the early 1900s as we read how Joplin tried to make a living as a musician. Joplin seems troubled about everything in his life but music. The story captures his dilemma well and connects it to Phoenix’s current feelings about her music.

Phoenix and the mysterious presence are becoming linked in ways that will threaten her career and family. I will admit there are a lot of elements I liked in Joplin’s Ghost starting with Phoenix, her father Sarge, the relationship with her boyfriend, Carlos Harris.  Those elements kept me reading.  However, I don’t know if the ghost story element using Scott Joplin as a conduit worked for me.  Due does an excellent storytelling job of making those two worlds connect.  I guess I was more interested in Phoenix and her rise into becoming a singing star.

Joplin’s Ghost is part historical fiction, part urban drama, and part ghost story that creates an interesting mix unlike anything I’ve read in quite some time.  While I may not liked the entire novel, there’s plenty I really liked and will recommend the novel for readers who are looking for something different to read.