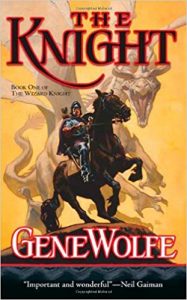 Legendary author science-fiction and fantasy author Gene Wolfe died on April 14th at the age 87. Wolfe created a body of work over five decades that placed him at the top of the genre and considered by many to be the best writer that science-fiction and fantasy had ever produced.  I wrote a blog post about his influence in the genre and the tributes poured in over the recognition of his immense talent.

I read the Wizard Knight Duology in honor of passing. I have read and reviewed two standalone novels: Pirate Freedom and The Land Across over the years.  Those books belied his reputation of being an author hard for readers.  Wolfe’s best-known books, The Book of the New Sun, gave him the reputation as a writer’s writer and his use of the unreliable narrator and dense prose throughout most of his work has either entranced or frustrated most readers.

Well, The Knight falls in line with the aforementioned Pirate Freedom and The Land Across as some of Wolfe’s more accessible work. It is the story of a teenage boy transported to a magical realm of seven levels of reality. He is known as Sir Able of the High Heart in this realm and is viewed as a full-grown adult. Sir Able has a sword promised to him and travels through these seven levels of reality to pursue what is due to him.

However, Sir Able is still a teenager despite his full grown appearance on the outside.  And this journey towards manhood provides many unexpected twists and turns. Wolfe has incorporated Celtic Mythology, Catholicism, and Epic Fantasy Tropes into an interesting mixture unlike any high fantasy novel I have read in a long time. The chapters are short but the density of the narrative took me awhile to get through it.

The Knight is the first half of the duology and story ends like one half of a complete story.  I’m eager to start The Wizard, the second book of the duology, and find out how Sir Able’s story concludes.  I recommend The Knight as an entry point into Wolfe’s work and hope these books get wider recognition as a major contribution to fantasy literature.  Rest in Power, Gene Wolfe.