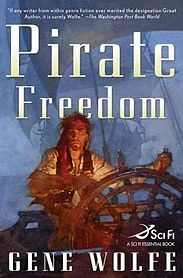 Gene Wolfe is considered one of science-fiction’s greatest living writers. His Solar Cycle Series(Book of the New Sun, Book of the Long Sun, & Book of the Short Sun) are recognized as modern classics and one of the best series ever written in the genre.

Also, he has received the genre’s major awards (Nebula and Hugo) and acclaim from other authors and critics in the field as the science fiction writer who belongs on the same literary stage with heavyweights like Cormac McCarthy, Don DeLillo, &  Thomas Pynchon. With all that praise, I had to read a Gene Wolfe novel and find out if he deserves that kind of recognition.

Pirate Freedom is a story about Father Christopher, a Catholic priest, who has heard many confessions from his parishioners. However, he decides to reveal his past as a pirate and how his own confession made him become a man of the cloth.

His adventures as a pirate made this novel akin to Treasure Island by Robert Louis Stevenson or the Aubrey-Maturin books by Patrick O’Brian than a traditional science fiction novel or the science fantasies that Wolfe is known for.

Moreover, Wolfe is known for having unreliable narrators as his protagonists and making his readers work in his novels. Pirate Freedom bucks that tendency and read pretty straightforward and I felt the main character was a reliable narrator.

I believe that Pirate Freedom will disappoint Wolfe readers and fans because he decided to take a left turn from his standard themes in his other novels. Literary fiction readers would find this novel engaging and readable (like I did) but unless you’re a fan of sea adventure stories, it will leave you wanting more like eating an appetizer at your favorite restaurant.

However, Pirate Freedom is a good introduction into this celebrated author’s oeuvre and has made me want to read his aforementioned Sun Saga series to get a better representation of  how great a writer Wolfe really is.