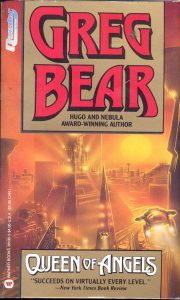 Queen of Angels by Greg Bear has been a book I’ve wanted to read for years. I’ve seen it at used bookstores and bought it several times intending to read the book but never get around to it until recently.

Queen of Angels is an ambitious, thought-provoking science-fiction novel that deals with race, crime, religion, and nanotechnology to ask the question what is the nature of the self and can man conquer it?

However, it would be easy and simplistic to write that man cannot conquer his own nature without God. But, Bear makes an ambitious attempt in the Queen of Angels.

The novel is basically three stories in one. It starts with Emanuel Goldsmith, a famous poet in 2047, who kills eight students at his apartment. All the evidence points to his guilt and the L.A.P.D. and the Selectors, a vigilante group, are looking for him.

But, Goldsmith is kept in hiding from them by his publisher, whose daughter he killed along with the other students at his apartment. The publisher is obsessed with why the poet would kill those students without any remorse and also is dealing with the pain of losing his daughter.

The publisher has Goldsmith examined by Dr. Martin Burke, a psychiatrist, who has developed the ability to enter a person’s thoughts. Dr. Burke created a device call the Country of the Mind and when he enters Goldsmith’s brain to determine the how and why of what he did. What the psychiatrist discovers is shocking and I felt were some of the most disturbing parts of the novel.

Meanwhile, there is an AXIS Robot who is reporting a major discovery from Alpha Centuri’s Planet B-2 that will change the face of science forever and will coincide with the people of Earth who are getting ready to celebrate the coming of the Binary Millennum. But, it is not what the scientists thought it would be and deals with a radical discovery from a computer.

Moreover, the L.A.P.D. sends Mary Choy, a detective, to Hispanola (a futuristic Haiti-Dominican Republic) to find Goldsmith who supposedly fled there because of his friendship with the country’s dictator, Sir John Yardley.

When Mary gets to Hispanola she will uncover something that will make her reevaulate who she is and learn about man’s inhumanity to man disguised as a utopia.

Bear intertwines all the storylines pretty well. But, there were some awkward moments (mainly because of the author’s ambition more than anything else) and he leaves out punctuation and normal sentence structure reminiscent of Cormac McCarthy’s Border Trilogy.

I’m glad I finally read the Queen of Angels and while Bear doesn’t fully convince me in his ambitious case to show man’s attempt in conquering his own nature. I like the fact that he wanted to ask the question….Who am I?

What is a legend? Does the truth about a legend matter only to those who believe in it?   Or does the propaganda about a legend matter more than the truth? These questions came to mind after reading Emphyrio by Jack Vance. Vance has been considered one of the giants of the science fiction and fantasy… END_OF_DOCUMENT_TOKEN_TO_BE_REPLACED

What is freedom? That question is the one that kept coming to mind as I read The Captives (Safe Lands Book 1) by Jill Williamson. It is a YA Dystopian novel and not a genre usually read. (However, I did read and review the wonderful Book Thief by Marcus Zusak last year.) This novel was recommended to me by… END_OF_DOCUMENT_TOKEN_TO_BE_REPLACED

The past two reviews, The Islar (a sequel) and The Two Kingdoms (a prequel) to the underground utopian classic, Islandia, has shown a depth and clarity of a fictional world unlike anything I’ve ever read before. Havoc in Islandia, a second prequel to Islandia, I believe is the most interesting novel of the three Islandian… END_OF_DOCUMENT_TOKEN_TO_BE_REPLACED

Last year, I posted a review for the book titled, The Islar, by Mark Saxton. It was a sequel to the underground utopian novel Islandia by Austin Tappan Wright. Saxton wrote two more novels in the Islandian universe and this review of The Two Kingdoms is a prequel to Islandia. The Two Kingdoms tells the… END_OF_DOCUMENT_TOKEN_TO_BE_REPLACED

When I heard that Ray Bradbury had passed about eight days ago, I realized that I had never read any of his books. Wow, that surprised me. Well, in honor of his passing, I decided to read his most popular and enduring work, Fahrenheit 451. “Do you know why books such as this are so… END_OF_DOCUMENT_TOKEN_TO_BE_REPLACED

Have you ever read a sequel that is better than the original? Well, The Islar by Mark Saxton, I feel is such a book. It is sequel to the underground utopian classic novel, Islandia by Austin Tappan Wright. For those who don’t know, Austin Tappan Wright was a Harvard-educated lawyer, who in is his free… END_OF_DOCUMENT_TOKEN_TO_BE_REPLACED

Queen of Angels by Greg Bear has been a book I’ve wanted to read for years. I’ve seen it at used bookstores and bought it several times intending to read the book but never get around to it until recently. Queen of Angels is an ambitious, thought-provoking science-fiction novel that deals with race, crime, religion,… END_OF_DOCUMENT_TOKEN_TO_BE_REPLACED

Well, one of my favorite literary genres is Utopian Fiction.  Actually one of my favorite novels, Islandia, is considered an underground classic of the genre. I’ve always been fascinated with writers trying to create a perfect society even though we human beings are not perfect. I bet God has a big, hearty laugh at our… END_OF_DOCUMENT_TOKEN_TO_BE_REPLACED