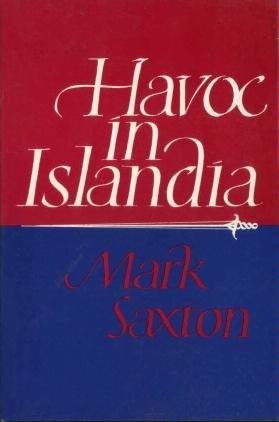 The past two reviews, The Islar (a sequel) and The Two Kingdoms (a prequel) to the underground utopian classic, Islandia, has shown a depth and clarity of a fictional world unlike anything I’ve ever read before.

Havoc in Islandia, a second prequel to Islandia, I believe is the most interesting novel of the three Islandian books written by Mark Saxton.

The novel tells the story of when Roman Catholicism arrived in Islandia determined to proselytize the natives and make the land become a Catholic nation. The protagonist, Bren, is an officer in the Islandian resistance who is trying to save the land from Catholic rule. He is young, inexperienced, and not fond of
Catholicism either. However, he is love in with a woman who has converted to Catholicism and that adds a little of bit intrigue to the story.

I know some Christians would probably automatically think this is anti-Christian novel and I could definitely see an aspect of that after reading the novel. However, I found the novel compelling and Saxton tells a good story.

My issue with the novel is that the portrayal of Catholics (I know they are the villains) in the story could have been handled with a little more depth and not be so stereotypical of what bad religion is supposed to be.

Moreover, there several points throughout the novel where the author shows some thoughtfulness to effect of what proselytizing had on the people.

For example, here’s an excerpt to demonstrate my point:

“The main tenets of the faith-I mean such things as the Virgin Birth, the Godhood of Christ, the Trinity, and the transubstantiation of bread and wine are extremely difficult. They confront the intelligence like a great well. They are also exceedingly beautiful. I came to see them as tests of my ability to deny my mind. Some people are able to accept these assertions with no reservation and say they then enter realms of a different sort of understanding. Many others, like me, work harder to get less. Because of the beauty of the concepts, and because they so much ought to be true, we others do manage to achieve a state in which we simultaneously believe and disbelieve without contradiction.

It took me tremendous effort and a long time to find my way into that second group. I went through it because I wanted the strength and reassurance of faith, faith in a determinant, something that could say yes or no as well as I am.”

That was said by Lord Mora, one of the leaders of the Islandian resistance and him dealing with his conversion to Catholicism. But, he decides to resist the church in order to keep them from controlling Islandia.

I could identify with Lord Mora’s struggles of believing in the basic tenets of Christianity because I’ve had some of same thoughts since I became a Christian. That excerpt reminded me of the Doubting Thomas story in Book of John, Chapter 20:24-29 of the New Testament where Thomas didn’t believe it was Jesus who appeared amongst the disciples after the resurrection.

I wished Saxton could have shown more of this type of struggle that the Islandian natives had in converting to Catholicism and that would have given the novel another dimension of depth and honesty.

Outside of that, I really enjoyed reading Havoc in Islandia. Unfortunately, this book is out of print as well as the other two aforementioned novels. You will have to go to the library or buy a copy from Amazon like I did to get it. I do believe it is well worth the extra trouble to read this book and the other two Saxton Islandian novels.

This novel and along with the others show the power of imaginative literature at its best and readers unaware of these books need to seek them out for their own reading pleasure.