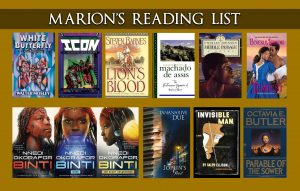 I have been deeply affected (and many Americans) by the death of George Floyd in Minneapolis on May 25th. Seeing a human being die like that should never happen in a civilized society. As a black man, I saw my worst fears come to light once again.

Also, I’m a book lover, author, and book review blogger and I have been reluctant to provide a reading list of black authors that non-black people should read. My reluctance comes from the fact that just reading books is not enough to deal with America’s greatest issue. However, I have been convinced in the last few days that books are a great starting place and can provide a fresh perspective on this issue.

I have seen many reading lists posted throughout social media. Most of them deal directly with racism from a non-fiction lens, and we need those books. However, my first language (besides English) is a story. I believe in the power of story, not as a replacement for actual life. It is as an enhancement to the human experience. Story is universal and everyone has a story to tell. And I believe you can learn from story better than just facts or data. Story has a way by passing your defenses and connecting to the humanity in all of us. In that spirit, here is my list of black authors you should read.

Also, I want to provide a broader range of black creativity in literature than just the status quo. My list outside of Invisible Man by Ralph Ellison, Parable of The Sower by Octavia Butler, & White Butterfly by Walter Mosley are not books most readers readily recognize. I choose these types of books on purpose. I believe in diversity not just being symbolic of adding another skin color in the room with white folks. But I want to go deeper with diversity on a secondary level. Art can showcase diversity on that secondary level. The chosen books feature a post-apocalyptic story, a space opera story, a mystery story set in post World War II Los Angeles, an alternate history story where slavery is seen from the reverse perspective, a historical romance story in the Old West, a classic 19th century story about love from a Brazilian viewpoint, a sea adventure story set during the Middle Passage, a modern classic about being invisible as a black man, and a comic book that looks at black conservatism.   This kind of range represents real diversity amongst black literature and I hope my list will broaden many readers scope of what black literature truly is.

2) Lion’s Blood by Steven Barnes: This is the first book of an alternate history two-book series that supposes if blacks colonized the South and own slaves who are white. This novel turns slavery on its proverbial head and shows the common humanity we all share no matter the condition it is presented.

3) The Parable of the Sower by Octavia Butler: This is one of my favorite novels of all time and when I first read back in 1993 I had an immediate connection to the story. It is on of the short list of novels I have always recommended to readers.   This modern version of the post apocalyptic story is actually quite believable and stark.

4) Joplin’s Ghost by Tananarive Due: I don’t read a lot of ghost stories. However, I found out about this novel recently and it covers my love of music. So, I had to read it. Due is an award-winning Horror novelist that deserves wider recognition. Joplin’s Ghost is a great place to start with her work.

5) Invisible Man by Ralph Ellison: This modern classic is a must read especially during the times we are going through in America. Invisible Man is a tough read but necessary to understand on how deep racism can cut in a society. This is one of my all-time favorite novels.

6) Icon by Dwayne Mcduffie (Writer) & Denys Cowan (Artist): Icon was a black-owned comic book series brought out in the early 1990s by Milestone Media. Milestone Media partnered with DC Comics to bring more diversity into the comic book medium and had some success. Icon was my favorite of the Milestone Media titles and was groundbreaking. Icon dealt with black conservatism, abortion, and a father-daughter like relationship I had not read before. Sometimes the best things to read can come from an unexpected place and this was the case with Icon. They have collected first eight issues into a graphic novel and readers can buy the rest of the issues through many online retailers.

7) Tempest by Beverly Jenkins: I will admit that I’m not much a romance genre reader. However, I believe in the power of story (as I stated earlier in the post) and an enjoyable story can come from any genre. Beverly Jenkins is considered the queen of African American romance and this story set in the American Old West is definitely worth reading.

8) Middle Passage by Charles Johnson: Like Invisible Man and Parable of the Sower, Middle Passage is on my short list of favorite novels. In the spirit of Moby Dick, Johnson tells the story of Rutherford Calhoun, a runaway slave and his adventures at sea. Middle Passage is philosophical, humane, and a darn good story.

9) White Butterfly by Walter Mosley: I was late to the party for the works of Walter Mosley. I rarely gravitate toward crime novels. However, I read White Butterfly and just really liked the protagonist Easy Rawlins. Mosley has an ear for dialogue and the setting of WW2 Los Angeles is an excellent choice for mystery series. This is the third book in the series. You can start here or go back and start with A Devil in Blue Dress, the first book of the series.

10) The Binti Trilogy by Nnedi Okorafor: This space opera trilogy of a teenage girl’s journey from home to one of the greatest university in the galaxy has been a delightful surprise. Okorafor uses the space opera setting to explore the transition to womanhood, what happens when people leave their community to better themselves, and what you thought you knew about home is not what it seems.

There’s my list. I hope my book choices will help to broaden the perspective of black literature and see how the power of story can illuminate the full range of humanity from a black perspective.

I saw this post on my Facebook page by the local library three days ago.  I have been thinking about how to answer the question since it posted.  I provided a comment soon after they posted on Facebook.  It was an interesting question and considering what we are dealing with in the COVID19 pandemic a… END_OF_DOCUMENT_TOKEN_TO_BE_REPLACED

Can a novel you read in your early 20s effect you in the same manner when you re-read it in your mid-40s? Invisible Man by Ralph Ellison gives this reviewer a split verdict to the aforementioned question.  It is the story of an unnamed protagonist who leaves the American South in search of a better life… END_OF_DOCUMENT_TOKEN_TO_BE_REPLACED