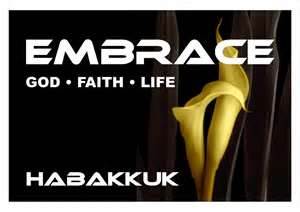 O Lord, I have heard the report of you,

In the midst of the years revive it;

in the midst of the years make it known;

and the Holy One from Mount Paran.

His splendor covered the heavens,

and the earth was full of his praise.

rays flashed from his hand;

and there he veiled his power.

Before him went pestilence,

and plague followed at his heels.

He stood and measured the earth;

he looked and shook the nations;

then the eternal mountains were scattered;

His were the everlasting ways.

I saw the tents of Cushan in affliction;

the curtains of the land of Midian did tremble.

Was your wrath against the rivers, O Lord?

Was your anger against the rivers,

or your indignation against the sea,

when you rode on your horses,

on your chariot of salvation?

You stripped the sheath from your bow,

calling for many arrows.

You split the earth with rivers.

The mountains saw you and writhed;

the raging waters swept on;

the deep gave forth its voice;

it lifted its hands on high.

The sun and moon stood still in their place

at the light of your arrows as they sped,

at the flash of your glittering spear.

You marched through the earth in fury;

you threshed the nations in anger.

You went out for the salvation of your people,

for the salvation of your anointed.

You crushed the head of the house of the wicked,

laying him bare from thigh to neck.

You pierced with his own arrows the heads of his warriors,

rejoicing as if to devour the poor in secret.

You trampled the sea with your horses,

the surging of mighty waters.

I hear, and my body trembles;

my lips quiver at the sound;

rottenness enters into my bones;

my legs tremble beneath me.

Yet I will quietly wait for the day of trouble

to come upon people who invade us.

Though the fig tree should not blossom,

nor fruit be on the vines,

the produce of the olive fail

and the fields yield no food,

the flock be cut off from the fold

and there be no herd in the stalls,

yet I will rejoice in the Lord;

I will take joy in the God of my salvation.

God, the Lord, is my strength;

he makes me tread on my high places.

The prayer of Habakkuk is one of the finest Hebrew poems in the entire Old Testament. It was written in the form of a psalm and was probably designed to be sung by Levites in the Temple services (1 Chron 25:1-8).

It becomes the capstone of the book and reveals the triumph of faith in the face of adversity. It is a fitting conclusion to the theme of the book. As such, it records a touching and heartwarming example of the manner in which the just can triumph over the adversities of life. Habakkuk looked beyond the vicissitudes of daily life and the threat of invasion to a time when God would right the wrongs of mankind and reward His servants for their righteousness. (pp.50-51 from Everyman Bible Commentary, Habakkuk and Zephaniah by Cyril J. Barber)

As the writer of the above passage stated that Habakkuk’s prayer is one the best Hebrew poems in the Old Testament, I recently heard a good friend tell me the exact same thing.  She remembered this prayer from her seminary studies and referred back to it from time to time.

I must admit I was surprised by her comment because in all the years I’ve been a Christian, I had never heard anyone make that kind of comment.  Or this prayer being mentioned from the pulpit and the entire book of Habakkuk being taught to the congregation.

There were a few things that stood out from the prophet’s prayer.  In verses 3:3-15, Habakkuk refers back to when God freed the Israelities from the Pharaoh of Egypt in the Book of Exodus. Because, the people of Judah were under control by the Babylonians, Habakkuk wanted God to reveal his power like he did in the aforementioned sentence.

What that section of the prayer revealed to me is the interconnectedness of the entire Bible.  Habakkuk referred back to the earliest time of God’s story for what He did for his people under dire circumstances. And he foreshadowed in Habakkuk 2:4, a key principle of Paul’s ministry in the New Testament.  Who knew this obscure book had this kind of connection in the Bible and makes me realize that we should read and study God’s entire word not just what’s popular in our current form of Christianity.

Second, in verses 3:4, 9, 13, the prophet inserted the word Selah. The only other place that word is mentioned is in the Book of Psalms. It revealed that Habakkuk’s prayer was meant to be set to music.  Also, that insertion was to give worshippers time for reflection.

Hmm…reflection.  Do we reflect in our society?  Do we really take time to stop and think about God’s word and what we are to learn from it?  Or do we consume it and move on to the next sermon or bible study?  It seems in a culture of information, there’s not time for any kind of reflection and I believe that is one of the downsides of having access to almost everything we want at our fingertips or a click.

God’s word demands reflection especially when bad things happen in our lives. Prayer is that time for reflection more than any other time in our busy lives. If we don’t pray and reflect, how can we ever get closer to Him and draw on his strength when we needed the most.

Lastly in verses 17-19, Habakkuk’s closing was best describe like this:

As one compares the beginning of the book of Habakkuk with its closing, it is clear that outward circumstances had not changed. Only the prophet had changed. His former bewilderment and confusion had given way to peace and trust in the Lord. It was the Lord who then filled the prophet’s vision and satisfied his soul. Although Habakkuk’s questions had not been answered, his doubts had been resolved. The vision God had given him of His plan and purpose had met the deepest needs of the heart.

Habakkuk’s faith and trust in the Lord illustrate the way Christians today should face adversity. He did not give way to fatalism, nor did he adopt a stoic attitude. He avoided the pitfall of passive resignation as well. Though his inward parts trembled, his attitude was one of submission to the will of God, and he exercised active dependence upon Him. (pp. 62 & 64, Everyman Bible Commentary, Habakkuk and Zephaniah by Cyril J. Barber)

Those above passages were well written and reveals to me a big reason why unbelievers have problem with the God of the Bible and refuses to believe in Him.

How can I trust a God that has allowed slavery, oppression, and the wealthy exploit the poor throughout human existence? How can I trust some entity that is unseen and will probably never to get see even though his believers keep talking about a second coming?  It’s easier to trust in a government that can give me assistance when I’m in economic trouble or create laws to right societal wrongs.

Well as a believer, I can not give you the most reasoned and logical answers to satisfy your doubts.  However, in reading Habakkuk and being a Christian for the past decade I’ve learned the change comes from within.  Being a religious person means changing yourself not other people.  I can’t change my wife or my children or my friends or that other ethnic group or rich people and as along as you always focus on the outward things of society, I believe you will never or ever be able to trust in God.

As long as you trust in yourself and your own abilities, you will never be able to cross that bridge to trust in an unseen God.  But, the great thing about this God is that he will receive you with open arms even if you have rejected him repeatedly. That, I can speak from direct experience.  And after reading Habakkuk is a reminder of this principle.

I would like thank everyone who read this study on the Book of Habakkuk and I hope this little obscure book from an obscure prophet is made a little more known to all of us who believe in Him and even those who don’t.

Are you from everlasting O Lord my God, my Holy One We shall not die O Lord, you have ordained them as a judgment And you, O’Rock have established them for reproof You who are of purer eyes than to see evil And cannot look at wrong Why do you idly look at traitors And… END_OF_DOCUMENT_TOKEN_TO_BE_REPLACED

O Lord, how long shall I cry for help and you will not hear? Or cry to you Violence! and you will not save? Why do make me see iniquity, and why do you idly look at wrong? Destruction and violence are before me; strife and contention arise. So the law is paralyzed, and justice… END_OF_DOCUMENT_TOKEN_TO_BE_REPLACED