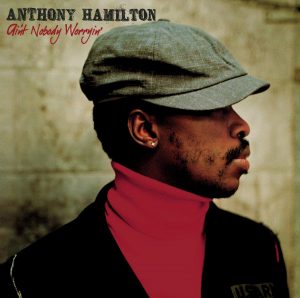 Anthony Hamilton is my favorite male R&B singer post the year 2000 (John Legend gets an honorable mention). I will admit that my favorite R&B music is from the late 1970s-early 1980s and Hamilton’s sound reminds me of that time period but its modernized for the current age.  His voice reminds me of Charlie Wilson (of the Gap Band fame), Curtis Mayfield, and Donny Hathaway.  But it is all his own.

I have all of his albums downloaded on my iTunes account. However, Ain’t Nobody Worryin is my favorite and this Hamilton album is a part of my regular listening.  Ain’t Nobody Worryin is Anthony’s third release and followed his breakout album, Comin from Where I’m From. This album has a fuller and richer songs with songs like Southern Stuff (an ode to black southern culture), Can’t Let Go (about a woman that he can’t move on from), Ain’t Nobody Worryin (a socio-political song that echoes Stevie Wonder, Marvin Gaye, & Curtis Mayfield), Pass Me Over (the best secular, gospel-flavored song I have ever heard and has allusions to the Passover from the Book of Exodus in the Old Testament of the Bible), and Change Your World (my favorite song on the album and a reminder how real love can change your life).  Ain’t Nobody Worryin’ has a range that is in the spirit of albums like Songs In The Key of Life by Stevie Wonder, That’s The Way of World by Earth, Wind, & Fire, Diamond Life by Sade, & Positivity by Incognito.

R&B (or soul music) does not get credit for its range regarding to the human condition.  Beyond songs for the bedroom, the genre can speak to wider issues and Hamilton’s album resonates on that level.  It will always be a part of my regular music listening and R&B music lovers should have it as a part of their music collection.

I had a good discussion recently with my friend about classic jazz. I mentioned that Wes Montgomery is my favorite when it comes to that genre of music. However, when it comes to classic jazz Wes Montgomery does not get mentioned in the same discussions as Duke Ellington, Charlie Parker, Miles Davis, John Coltrane, &… END_OF_DOCUMENT_TOKEN_TO_BE_REPLACED