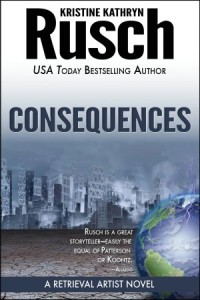 Miles Flint, a Retrieval Artist, was hired by a prominent couple on the moon colony of Armstrong to find their daughter who has become a Disappeared because of her political activities on several planets.

Flint retrieved the daughter and reunited her with the parents.  However, the reunion was not a happy one and short-lived.  They were murdered by an assassin that might be linked to the daughter’s political activities from her past.

Also, Flint has been implicated in the murders because of his contact with the family before their deaths.  Noelle DeRicci, his former partner on the Armstrong Police Force, has been investigating the murders and tries to come to grips with Flint’s involvement.

I can not give away anymore of the plot.  However, there are several twists and turns in this hybrid science fiction thriller that will keep you guessing as you turn the pages.  Consequences is book three of the Retrieval Artist Series and I will admit in this review, I’m hooked.

Rusch has created some wonderful characters in Miles Flint and Noelle DeRicci.  I have been drawn into their relationship since The Disappeared (Book 1) and into Extremes (Book 2).   Flint has grown into a top Retrieval Artist and learns that being a successful one means that your integrity and morality will always be tested. Meanwhile, DeRicci has grown as a detective and learns that the politics in her position can challenge her morality as well.

Moreover, the setting for the human and alien cultures are well-detailed, believable, and original.  Consequences will be one of my favorite reads of 2014 and I highly recommend reading it.  The good thing is the each book in the Retrieval Artist Series can be read as a standalone.  I would suggest that you start with The Disappeared to get the full history and background of the characters and the world created in the series.