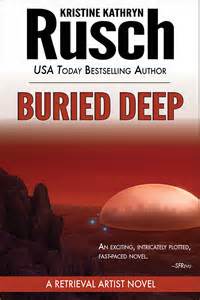 Those two questions give Buried Deep by Kristine Kathryn Rusch a thought-provoking theme in the fourth entry of this excellent sci-fi hybrid thriller series.

Bones have been discovered beneath the Martian soil in the main city of the alien culture, The Disty. They evacuate the city believing it to be contaminated. Forensic Anthropologist Aisha Costard finds out the bones belonged to a woman who had disappeared because she was charged with crimes against another alien culture. Also, the dead woman had children disappeared with her and are believed to be alive.

Costard hires Retrieval Artist Miles Flint to find out where these disappeared children are.  Flint investigates and learns how the dead woman and her offspring could be the lynchpin to a major human-alien relations incident throughout the solar system.

What makes Buried Deep as well the other books I’ve read in the Retrieval Artist Series is the characters of Retrieval Artist Miles Flint and Moon Security Chief Noelle DeRicci. They started out as partners in The Disappeared: Book 1 of the series and now are on the opposite sides of the law. Both have learned that justice is not always black or white.  Because of that reality, their beliefs and friendship have been challenged as the series has developed.

Rusch creates a credible multicultural society without being patronizing or politically correct. She shows the strengths and weaknesses of such a society and how it mirrors our current global culture. Also, the books are intricately plotted and keeps the reader guessing like the best thrillers do.

The Retrieval Artist Series has become to me like those who have a favorite TV Show (Breaking Bad, Mad Men, Lost). I have to read each book to find out what happens next.  Now I understand how good entertainment can be totally addicting in a good way and the power of excellent storytelling can make you a little more open-minded. I highly recommend Buried Deep like I have with the first three books in this series.