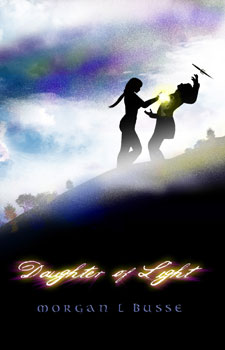 Every so often, you will get a book that takes awhile for you read for no apparent reason. Work schedule gets a little longer, family obligations eats up more of your time, and distractions from like getting sick or car problems will keep you from giving your full attention to reading.  However, once you’re able to get some reading time, the story takes you away from what life has thrown at you.

Daughter of Light became that book for me.

It’s a debut novel from Morgan L. Busse and the story revolves around Rowen, a young woman who got banished from her village because she was accused of being a witch. Even though she was devastated by her banishment, Rowen gets an opportunity to become a varor (bodyguard) for Lady Astrea, daughter of King Gaynor of White City.

Rowen’s journey from banishment to discovering her purpose and coming to grips with her gift has been told before in many fantasy novels. However, Busse adds her own style to this theme and creates a fully fleshed out fantasy world in Daughter of Light that made a familiar trip truly enjoyable to read.

Moreover, the story is infused with a Christian worldview, with acknowledgement to The Word as an ancient source of power, inspiration and faith for some of its citizens. It is definitely a reference to biblical scripture but Busse weaves it into her narrative pretty well without being preachy or overbearing.

I did think the rhythm of the novel was at a different speed than I’m used to from this genre. There were a lot of short sentences in the narrative where I was expecting longer flowing sentences and more expository passages. However, the characters were fully developed and made up for whatever lack of rhythm that the novel had.

Daughter of Light is an excellent addition to the fledging genre of Christian Speculative Fiction and should be recommended for all readers of fantasy literature.