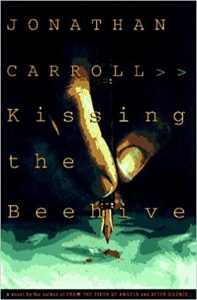 Jonathan Carroll has become an author on my must read list that includes Charles de Lint, Guy Gavriel Kay, & Jorge Amado. Carroll’s brand of contemporary fantasy and surrealism is unique to the fantasy genre. I have read and reviewed four other Carroll novels: White Apples, Glass Soup, The Land of Laughs, and The Wooden Sea previously.

Kissing the Beehive is the story of best-selling author Sam Bayer.  Bayer is in a rut with his writing career and has not been able to deliver his latest novel to his publisher from which he received a huge advance. He visits his hometown of Crane’s View, New York for inspiration.  Bayer learns of an unsolved murder case of a girl named Pauline that happened when he was a teenager.

He investigates the case with the help of a childhood friend, Frannie McCabe, the town’s police chief. As Sam delves deeper into the cold case, Pauline’s murderer reappears and endangers everyone close to him. Also, Bayer begins a new relationship with a fan named Veronica Lake.  Lake claims to be his biggest fan and as the relationship deepens Sam learns the details about Veronica’s past connecting her to the murder.

Carroll resolves the story well enough, but I wanted more from the novel.  Kissing The Beehive read like not having enough of a well-cooked meal you expected for awhile. There was more story left to be written in Kissing The Beehive.  Even though, it is the first book of a trilogy; the novel was a complete story. Kissing the Beehive is my least favorite Jonathan Carroll novel I have reviewed.  Recommended for Jonathan Carroll fans but newcomers should read The Wooden Sea or The Land of Laughs as a better representation of his unique stories.