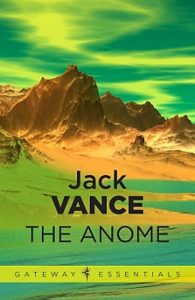 I was told by a reader since I like imaginative and escapist fiction I should read Jack Vance. I had heard of Vance’s name over the years but never had an inclination to read any of his work.  I did internet research about the author and found out he has been an inspiration for many science fiction and fantasy’s greatest writers.  Vance’s novels were well regarded by mostly everyone in the genre. So I decided to read The Anome, Book 1 of the Durdane Trilogy as my introduction to Jack Vance.

The Anome is Vance’s entry into utopian fiction where the multicultural world of Durdane has lived peacefully for generations. The various cultures of Durdane lived in their own way but are controlled by torcs around their necks provided by the Faceless Man.  If anyone in Durdane rebels against the Faceless Man, their torc will explode and blow off their heads.

Well, a young musician named Gastel Etzwane challenges the power structure of the Faceless Man and the Anome when he finds out that a half-breed race (human and alien) called The Roguskhoi are determined to take over Durdane.  The Faceless Man has decided to peacefully co-exist with The Roguskhoi and Etzwane is dead set against that course of action.

The novel moves swiftly as Etzwane grows from childhood into manhood and learns more about the power of The Anome and why it has taken the position; it has towards The Roguskhoi.

The Anome is the opening book in the Durdane Trilogy and gives a solid introduction into the world of Durdane.  I enjoyed Vance’s storytelling, setting, and nomenclature in the novel.  Vance reveals how complacency sets within an utopian society.  I’m glad that Jack Vance was recommended and I’m looking forward to reading the rest of the trilogy.