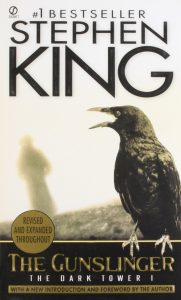 I rarely jump on the pop culture event of the moment.  I have always waited for the event to die down or choose something out of the mainstream.  However, when I found out about the Dark Tower Movie starring Idris Elba and Matthew McConaughey as foes.  I was intrigued and decided that I would read the first book in the much beloved Dark Tower Series by Stephen King.  I liked the movie despite the heavy criticism it has received from critics and Stephen King fans.

The Gunslinger centers on Roland Deschain, the last of his kind, in pursuit of his nemesis, The Man in Black across the desert in the Midlands, a post apocalyptic fantasy world.  Roland is determined to kill the Man in Black for reasons that become more clear as the story progresses.  Meanwhile, he meets up with various characters, most notably a boy named Jake Chambers, who becomes his companion throughout the novel.

Roland learns about the boy and reveals some of his past.  As they pursue the Man in Black, the pair face dangers that leads to a surprising conclusion as the opening salvo to the Dark Tower Series.  King tells a fast-paced story with great characters and a depth that includes a lot of religious symbolism I did not expect for a King novel.  I have to admit that the religious symbolism was glossed over in the movie and I wished more of it could have made itself into the film.

The Gunslinger was an entertaining and fascinating read.  I’m looking forward to reading the entire Dark Tower Series over time and glad I took a chance on the pop culture event of the moment. Sometimes, what’s popular in the moment is worth reading (or watching) and has much more artistic value than given credit for.  Recommended.