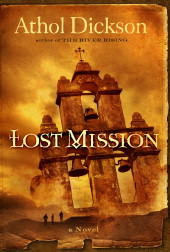 I must admit I love lists.  I believe lists are an American phenomenon and they create the three C’s: conversation, controversy, and community.

Well, I want to create a list of twenty novels published since 1992 that will be considered the new standards for fiction lovers like myself.

Also, I will admit I’m a maverick and someone who has gone against the tide quite a bit in my life.  So I want this new standards of fiction list from every genre not just literary fiction like most lists are today.

I do mean every genre: science-fiction, fantasy, horror, mystery, literary, romance and even Christian Fiction. As matter of fact I’m nominating the book that is my image for this blog post.  I believe Athol Dickson is one of Christian fiction’s best novelists and deserves a wider audience outside of that genre.

The books with the most responses will be complied onto a final list and posted next week.

(For those readers who do not have a WordPress account, you can email your list to me at kammbia1@gmail.com.)

2) Opposite of Art by Athol Dickson

4) Bag of Bones by Stephen King

5) The Child Goddess by Louise Marley

7) The Testament by John Grisham

8) Book of the Long Sun Series by Gene Wolfe

10) The Sparrow by Mary Doria Russell

What are your nominees?

3 Responses to Wisdom From Kammbia 2.27: The New Standards of Fiction (Must Read Novels Published In The Last 20 Years)