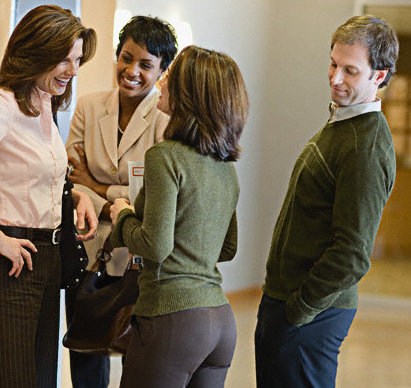 Tricia and Joseph had a lovely dinner at their favorite restaurant in Galicea. They spent several hours eating, talking, and laughing.  For the first time in years, the dinner reminded them why they got married in the first place. They liked being with each other.

She even got him to go see their favorite stage play this evening, “It’s A Woman’s World and Men Are Just Livin’ In It.” Tricia looked forward to finally discussing her favorite play with the person she cared about the most.

They arrived at the theater and as they got seated, a beautiful woman with long brown hair and a curvaceous figure walked by Joseph.  He made a quick glance at the woman’s nice rear end and smiled.  However, Tricia saw his glance and if looks could kill then Joseph would have died with a massive wound to the head.

Even though the glance was barely a second, the rest of the evening was ruined and Joseph would have to endure Tricia’s anger for next several days until she got the answer she wanted on why he looked at that woman’s behind.

That scene was from a story in my fictional world of Kammbia, but I heard about numerous incidents just like that one in real life over the years.  And the question that women have asked is Why do Men Look?

This is an excerpt from caller to Dennis Prager’s radio show:

Tony: Then how do I know if I am actually committed to her, and I’m ready for a marriage relationship, or if I’m just, you know, she’s not the one because I’m still attracted to other girls?

DP: You will always be attracted to other women, always. That’s why I’m writing this book on male sexual nature. I realize men need it as much as women do. That is not solvable. It will not stop. It will not end. Don’t romanticize it. You can be spectacularly in love, and you will still be attracted to other females. That is the way we are programmed, we men. It is not a matter of societal influence. It is the way we’re programmed. It is like saying how do I know I am committed to hamburgers when I continue to find, I don’t know, give me another…I don’t know, sodas, hot dogs, right. I continue to find hot dogs desirable. It is that built-in. And so that is why commitment is volitional. That is a…your commitment to be monogamous is a statement of values, but it is not a statement of nature. Your nature is not monogamous. Your values are monogamous. And that is where, that’s why values…that’s what…values are what we hold to be more important than our feelings. So it’s not going to happen to you. But I know what you’re asking. But Dennis, how do I know I’m ready to marry when I still find, you know, half the women in the street, and all of the ones in the ads, and on TV, and in movies, so enticing. And the answer is, they will never stop being enticing. So you will never get married if you’re waiting for that magic bullet. The magic bullet doesn’t exist for a man.

DP: This is…the motto that I have here is male sexual nature, men are embarrassed to talk about it, and women are afraid to hear about it. And that’s…you’re living that situation. She needs to understand this is the way men are.

Women don’t want to know this, men don’t want to talk about it, and so what ends up is terrible, gratuitous pain between men and women. And guys, if you want to be ready for marriage, and your criterion for readiness is not attracted to other women? You’ll stay single ‘til you die. My father is married, what is he married, 65 years? Let’s see, he’s 89, yeah, 65 years. And as he says, he wants the coffin to be a little open so he can check out the women at his funeral. (laughing) Okay? All right, folks? And I got this openness about sexuality from him, in a committed relationship to my mother for 65 years, and still looking at women.

That was one of the most honest and refreshing calls I had ever heard on the radio.  Dennis Prager has taught about male sexuality for years on his radio show.  And the items I placed in bold letters are a reason Why Do Men Look and that women (while they will still disagree) should have some kind of understanding about of it as well. However, I would like to go a little further and show the inherent tension in a man’s nature.

“Now Laban had two daughters. The name of the older was Leah, and the name of the younger was Rachel. Leah’s eyes were weak, but Rachel was beautiful in form and appearance. Jacob loved Rachel. And he said, ‘I will serve you seven years for your younger daughter Rachel.’ Laban said, ‘It is better that I give her to you than that I should give her to any other man; stay with me.’ So Jacob served seven years for Rachel, and they seemed to him but a few days because of the love he had for her.”  {Genesis 29:16-20 ESV Bible}

With just one look, Jacob was smitten with Rachel and he had to have her.  Even though, he had to marry Leah, the older daughter and was tricked to serve Laban another seven years before he could marry Rachel.  Because of her beauty, Jacob gave up fourteen years of his life.   Interesting.

“In the spring of the year, the time when kings go out to battle, David sent Joab, and his servants with him, and all Israel. And they ravaged the Ammonites and besieged Rabbah. But David remained at Jerusalem.

It happened, late one afternoon, when David arose from his couch and was walking on the roof of the king’s house, that he saw from the roof a woman bathing; and the woman was very beautiful. And David sent and inquired about the woman. And one said, ‘Is not this Bathsheba, the daughter of Eliam, the wife of Uriah the Hittite?’ So David sent messengers and took her, and she came to him, and he lay with her.” {2 Samuel 11:1-4 ESV Bible}

David gets Bathsheba’s husband drunk and sends him to the front of the battle lines and gets him killed.  Wow!  That could have been from an episode of General Hospital or As The World Turns.  David was a revered King and a true follower of God.

What those two biblical stories revealed is one of the greatest tensions in a man’s life.  His instinctual nature to look at woman he’s attracted to can lead him to do unbelievable acts in the name of love or destructive acts that could ruin his life.  That tension is one that men deal with daily.  It never goes away and does not change if even you become religious.  You are still a man and must acknowledge that instinct for the rest of our lives.

Let me be clear and write that there are men who have successfully suppress this instinct and don’t look at other women.  However, you are the exception and that’s great you have been able deal with this tension effectively.  For the rest of us….we have to first be honest with ourselves and understand this is a part of our sexual nature and not be embarrassed by it.

Ladies, I hope this post can create at least an understanding about your man’s sexual nature and Why Does He Look?