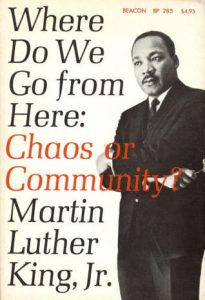 “We still have a choice today: nonviolent coexistence or violent co-annihilation. This may well be mankind’s last chance to choose between chaos and community.”

Martin Luther King’s last sentence from his last book, Where Do We Go From Here: Chaos or Community sums up his powerful and convincing argument for nonviolent coexistence for humanity. I have to admit that King has become more of symbol for me as a black man than actually reading and digesting what he has actually written. I’ve heard his “I Have a Dream Speech” many times throughout my life.  For a good portion of my childhood, American black history only goes from slavery to civil rights.  We have offered Martin Luther King to the American population as the Moses figure that freed all of black folks. Unfortunately, our society has presented symbolism (however well intentioned) as a three-course meal instead of the appetizer that it should always have been.

King wrote his fourth and final book during the last 18 months of life.  I learned he was living in Chicago (I never knew that he lived there and it’s a great city.) and wrestled with the issues of that time, like the Black Panthers, Nation of Islam (covered in Malcolm X’s autobiography), and white liberalism.  Where Do We Go From Here took on those concerns head-on and King did not mince words in defense of his nonviolent philosophy to bringing a lasting change in American society.

Here’s an example of his thoughts in the chapter about racism and the white backlash:

“Racism is a philosophy based om a contempt for life. It is the arrogant assertion that one race is the center of value and object of devotion, before which other races must kneel in submission. It is the absurd dogma that one race is responsible for all the progress of history and alone can assure the progress of the future. Racism is total estrangement. It separates not only bodies, but minds and spirits. Inevitably it descends to inflicting spiritual or physical homicide upon the out-group.”

King pulls no punches in that paragraph and gives the best definition of racism I have heard or read in my entire life. I will always refer to this paragraph when someone asks me what is racism. Also, he addresses the black power movement of the late 1960s and the dilemma of African Americans living in a world where whiteness is the standard in American society. King (like Malcolm X) believes in an international perspective for the true liberation of black people along with other people of color.  I have always believed in that perspective and seeing in it both Malcolm X’s autobiography and King’s last book confirms that I have always been on the right track about having an outlook that includes all people of color throughout the world.  My upcoming novel, Ciscoe’s Dance, has a comment from Diondray Azur to the main character, Ciscoe Maldonado, that reflects the same outlook:

Diondray wrote the comment in a letter to Ciscoe as he travels the entire land of Kammbia. Human beings have much more in common than what we perceived as differences. King shows the blueprint of that reality in his last book and urges leaning into that commonality instead of the division promoted by the extremes of our society.

I’m delighted that I have actually read King’s words and have a newfound respect for his philosophy. He understood the time he lived in and saw that it applies to our current situation. Where Do We Go From Here: Chaos or Community should be required reading for high school and college students for American History classes.  Also, I would recommend this book for readers who are politically active and have considered King as milquetoast in his response to American white supremacy.