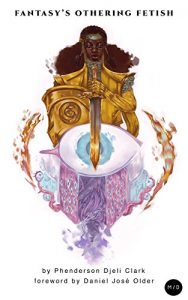 Fantasy’s Othering Fetish by P. Djeli Clark came onto my radar recently and after reading the comments in Goodreads about this book made me want to read it.  Actually, it is more of a long-form essay than a full-length book, Clark makes the argument about how the fantasy genre has treated the non-European as an “other.”

Clark provides examples from Robert Jordan’s Wheel of Time Series, George R. R. Martin’s A Song of Ice and Fire Series (AKA Game of Thrones for TV) and the Patron Saint of the Genre, J.R.R. Tolkien’s Lord of the Rings Series for how the imaginative vision of each of these writers view non-white folk in their fiction. Clark gives credit to Jordan for bringing diversity into his series and less so for Martin and Tolkien.

It would be easy to dismiss this long-form essay as someone who wants to force multiculturalism and diversity down the proverbial throats of fantasy readers.  However, I would suggest fantasy readers and writers examine Clark’s thesis and determine if there is a legitimate merit to his argument about the genre on the whole.  Clark is a fan of the genre and wants to see it progress like the rest of society.

I will admit that as a writer in this genre, Clark’s essay will cause me to look more critically at my work in the world of Kammbia and hope not to fall into easy stereotypes. I highly recommend Fantasy’s Othering Fetish for fantasy readers and writers who want to see the genre progress into a future that embraces imaginative and fantastical works worldwide.