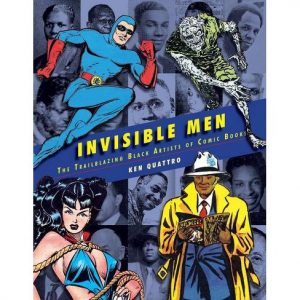 Black History Month is in full swing and I have seen many social media posts recognizing the achievements of African Americans throughout the nation’s history.  However, I have always wanted to find out something that does not get much recognition or overlooked during this annual celebration in February. Invisible Men: The Trailblazing Black Artists of Comics by Ken Quattro is an outstanding example.

I have shared that my love of reading came from comic books as a teenager. The mixture of prose with art laid out in sequentially in a comic over the course 25-30 pages is an interesting and unique way of storytelling. The superhero genre has dominated the comic book field since the 1950s during its Silver Age. It seemed on the surface the comic book artists from that time were mostly white men.  However, I have learned there were a handful of black comic book artists working from the late 1940s through late 1950s.  These artists worked for a little pay but created a broader outlook for the industry on the whole and expanded it beyond superheroes.

Invisible Men profiled eighteen black comic artists and the path of their careers from the aforementioned time period.  Most of the artists grew up drawing as kids and trained as fine artists, but turned to comic book art to make a living. The author highlighted how the artists worked on comic books covering adventure, crime, horror, humor, and romance from a white perspective.

The most gifted of the artists was Clarence Matthew Baker. Baker was known his ability to draw beautiful women with accurate proportions and great detail.  His best known work was from a titled called Tiger Girl published in 1946 and Canteen Kate published in 1952.  Tiger Girl featured a heroine fighting in the jungles of Africa and Canteen Kate was another heroine story set during wartime with her giving the troops much-needed morale.  The stories were stereotypical and a product of its time.  However, Baker’s art stood out as exceptional and could have been published now.

Elmer Cecil Stoner was another artist that caught my attention. Stoner worked on comics like The Blue Beetle published in 1944, which had a superhero take on Hitler and fascism. He worked on a comic book called The Funnies published in 1940 and featured the superhero Phantasmo who looked like an early vision of Marvel’s The Giant Man.  Stoner was a part of the Harlem Renaissance and had connections with Langston Hughes, Duke Ellington, and Zora Neale Hurston.  It showed the comic book artists were not excluded from the wider artist community.

Quattro highlighted the effects of the Jim Crow laws had on these artists.  But, amid that inequality, the comic book industry provided an unlikely avenue for black artists to showcase their talents.  Also, Stan Lee (before he became recognized for his association with Marvel Comics) hired several of the artists to work on various titles for Atlas Comics.  Lee was a proponent for getting black artists work in the industry.

Invisible Men is a book that reveals a slice of American History I had no clue about until a week ago.  It shows the range of black people doing something that had been swept up by the annals of history. I highly recommend this book for comic book fans and historians and those who want to learn more about the nontraditional avenues black people inhabited in our nation.

← Wisdom From Kammbia Book Review 74: Playing in the Dark by Toni Morrison
Icon #2 →