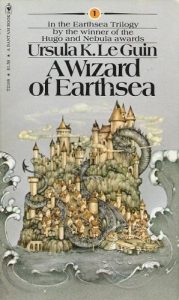 Sometimes you can listen to an author explain what made them write a novel and it changes your mind about reading that book.  This was the case for A Wizard of Earthsea, the first book of Earthsea Cycle by Ursula K. Leguin. I recently watched the documentary called The Worlds of Ursula K. Le Guin on Amazon Prime. It covered Le Guin’s career and she explained how the Earthsea Cycle came together.  I found it interesting that she wanted to have a person of color as her protagonist and at that time in 1968, there was no fantasy novels with that kind of person as the main character.

I decided to try A Wizard of Earthsea for a second time.  It was the story of a young wizard named Ged and his journey in a world of archipelagos.  Ged was also known as the Sparrowhawk has the power to become the greatest sorcerer in this world.  However, he had to reconcile with the darkness inside of him along a with a rival sorcerer and a powerful dragon as he moved towards his destiny.

This is a beloved novel by many readers of fantasy literature and has earned its place in the canon of the genre.  I don’t have much to add that anyone else has written before.  However, I will state that I appreciate Le Guin adding a diverse cast in a high fantasy at the time the publisher could have demanded she have a white male protagonist instead. Also, the world building is stellar and the main reason I kept reading the novel.  Le Guin is a master world builder and she understands that’s the foundation for imaginative fiction.

I know this is the first book of the series, but I could not connect with Ged on any level in the story. I was able to read the story without any attachment to him as a protagonist.  I don’t need to relate to him in a manner that he could be someone I know in real life.  However, I wanted some kind of connection to him as a human being and it did not happen for me in this novel.

I liked that the power of magic came from naming instead of some talisman or other supernatural feature.  I can tell that was different for the genre in the late 1960s when the novel was published.  Also, I enjoyed the fact the story was not about war and the overthrowing of a kingdom. That has been done repeatedly in fantasy and has never been the reason why I read the genre.

There are some books you get reader enjoyment from and will become your favorites on that level. There are other books you can appreciate for its artistry and the influence it has on a genre.  A Wizard of Earthsea is the latter case for me. I will never consider it as a favorite book on a reading enjoyment level. However, as a fantasy reader (and writer) it’s essential for me to read and dissect why it has connected with some many readers in the half century since it has been published. I’m going to read the entire series and see how Ged grows throughout the books. Thank you Ursula Le Guin for writing a series of books that helped change my favorite genre for the better.