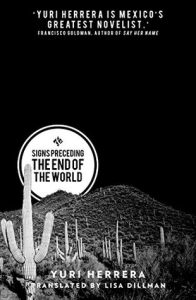 This book came to my attention during the controversy surrounding the novel American Dirt by Jeanine Cummins earlier this year.  I have not read American Dirt so I can not make a direct comment about the novel’s quality.  But it did make quite a stir in the Latinx Publishing community about lack of representation in traditional publishing while a novel like that one gets major press and recognition.  Also, I attended a conference here locally in San Antonio discussing the issues that American Dirt presents about the border and Latinos in general.  I learned about Signs Preceding The End of The World from that conference and several websites that provided alternative recommendations to read.