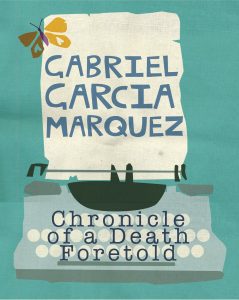 For the world-renowned novelist Gabriel Garcia Marquez, most readers have read or attempted to read One Hundred Years of Solitude or the more accessible Love In The Time of Cholera. Some (like me) have read both novels. However, Garcia Marquez has a body of work that gets overlooked by those aforementioned books.

I was in my local library here in San Antonio recently to pick up another book I had requested. I began to peruse the shelves and came across Chronicle of a Death Foretold. I pulled it off the shelf and started reading. Well, I checked out the book and spent the last two days reading it.

Chronicle Of A Death Foretold tells the story of a murder in an unnamed South American town. Santiago Nassar was killed by two brothers because of their belief that he had dishonored their sister whom he was to marry. It seems most people in the town knew the brothers would kill Nassar but did nothing to prevent it. The local police dismissed the brothers’ threat. Why would the people of town and the police ignored it?

Garcia Marquez narrates the novella through an outsider who is determined to find out what happen. The outsider delves deeper into the murder and learns Nassar got caught up into a situation where adult peer pressure took a hold of all the parties involved of his death.

Gossip, Reputation and Perception are aspects of human behavior that get easily dismissed in society. However, those aspects of humanity can lead to unintended consequences and in this case….a murder.

Chronicle Of A Death Foretold was an interesting story to read and believe a good entry point into the world of Gabriel Garcia Marquez. If you have not read the aforementioned One Hundred Years of Solitude or Love In The Time of Cholera, then this short novel will fit the bill.