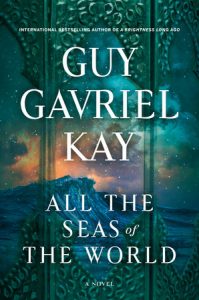 Guy Gavriel Kay has joined my short list of favorite authors, that includes Jorge Amado, Octavia Butler, Jonathan Carroll, Charles de Lint, Mark Helprin, Haruki Murakami, & Robert Silverberg.  I have read quite a bit of each author’s oeuvre and this my sixth Kay novel so far.

“In some places, times, the writer of a story might use ink, inkstone, brush to shape her telling. There are other ways, other times.

Sometimes the tale offered is of the lives and deaths of those deemed powerful. And sometimes it is about men and women trying as best they can to live, shape lives, despite the loss of a home, roots, origins, a sense of where they might belong.

Stories are, as much as anything else, an act of love.”

This is from the last page of Kay’s latest novel, All The Seas of The World, and a great explanation of what a story is. All The Seas Of The World is a story of assassination, tragedy, redemption, and the whims of fate. This novel is set in the same world as Kay’s previous two releases, Children of Earth & Sky and A Brightness Long Ago. Kay has created a reimagined Europe where he can explore culture on a large and small scale without being tied down to the facts of European history.

All the Seas of the World is set some years following A Brightness Long Ago and about two decades prior to Children of Earth and Sky. The story revolves around two main protagonists. One is Rafel ben Natan, a Kindath merchant and sometimes corsair with various identities because of his faith. The other is Lenia, a young woman who was abducted by Asharite corsairs as a child and turned into a slave. Now that she has escaped, Lenia is determined to get vengeance upon those who have wronged her. Kay weaves a large cast of supporting characters to carry forth the story. But Rafel and Lenia’s journey remains at the center of the novel.

It took me about fifty or sixty pages to settle into Kay’s latest novel.  He is not a writer that provides a quick or straightforward conclusion to his stories. Kay demands that you trust him to carry you along until the story’s conclusion.  If you are an impatient reader or like stories that get to the point, then I would not recommend this novel.  Or any of Kay’s prior novels.  In a world of quick consumption, Kay is the antithesis from a fictional standpoint.

However, if you are patient and willing to trust the author, then you will be rewarded with a depth and characterization that are some of the best fantasy fiction has to offer.  All The Seas Of The World can be read as a standalone novel, but I feel the prior aforementioned novels should be read too. Kay has developed a world unlike anything I have read in fantasy outside of N.K. Jemisin and deserves to be a writer read by both genre and literary fiction readers.  All The Seas Of The World is a very good Kay novel.  Not his best, but one deserving a close look of historical fantasy that is unique to modern imaginative literature.