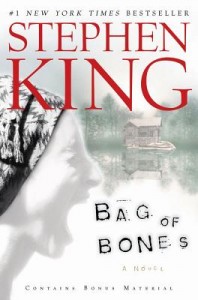 Bag of Bones is the story of Mike Noonan, a bestselling novelist with a great life until his wife dies in an accident near their Western Maine summer home. From that accident, Mike’s life is turned upside down and inside out.

Because of that event, Mike gets writers block, discovers their summer home is haunted and has a connection to the town’s lurid past, and is caught in the middle of a family custody battle with a woman half his age that has a beautiful three year old daughter and realizes that he deeply loves both of them.

This is a moody, atmospheric story and it felt like I was reading a John Irving or Richard Ford novel with a huge paint splattering of Stephen King over the top.  Bag of Bones qualifies for the first literary ghost love story I’ve ever read.

One of the things, I really enjoyed in this novel was King’s ability to show the pressures of a writer trying to produce the next bestselling book:

“Readers have a loyalty that cannot be matched anywhere else in the creative arts, which explains why so many writers who have run out of gas can keep coasting anyway, propelled onto the bestselller lists by the magic words AUTHOR OF on the covers of their books.

What the publisher wants in return, especially from an author who can be counted on to sell 500,000 or so copies of each novel in hardcover and a million more in paperback, is perfectly simple: a book a year.

Less than a book a year and you’re screwing up the publisher’s investment in you, hampering your business manager’s ability to continue floating all of your credit cards, and jeopardizing your agent’s ability to pay his shrink on time. Also, there’s always some fan attrition when you take too long.”

That section and the conversation with his agent was the most honest parts of the novel.  It felt like King wanted his readers to understand some of the burden he has being one of America’s bestselling novelists.

Moreover, I felt King wanted to show in this story the power of wealth and how it can control an entire small town. The good ol’ boy network and hate can make you do something that you will regret for the rest of your life and affect succeeding generations.

After reading Bag of Bones, I’ve learned that King is a gifted storyteller and I can see why he became one of our greatest bestselling novelists.  I know he is a polarizing author, but I believe he is a true talent and should be recognized as such.

I would recommend this novel an introduction to Stephen King’s work and also a good story to add to your reading bucket list.