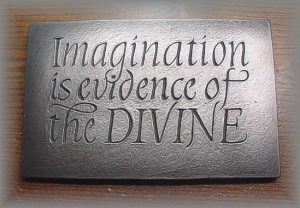 I have always been a believer in the importance of imagination in every aspect of our lives.  Especially when it comes to creativity and the arts.  I have been trying to find the proper definition of imagination and I believe I found it from this passage by Michael Card:

“The imagination is the bridge between the heart and the mind, integrating both, allowing us to think/understand with our hearts and feel/emote with our minds. It is a vehicle for truth. Through the use of images, metaphors, stories and paradoxes that demand our attention, it calls for our interaction. The imagination is a powerful means for communicating truths about God, and so God shows an awesome regard for the imagination in his Word.”

This definition captures the true meaning of imagination and embraces both its spiritual and secular aspects. However, there is a still a deep distrust of the imagination in both the religious and secular worlds.  Without imagination there would have been no possibilities for human achievement of any kind.  Imagination has pushed humankind forward like nothing else in history.  I hope that as we go forward into the future, we will embrace imagination for its invaluable role in civilization.  A society without imagination is a society that will never progress and allow its people to become fully human.