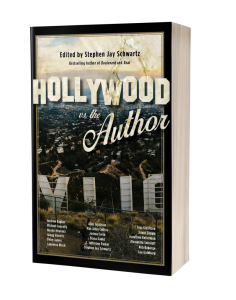 Most authors (I will include myself too) want to see their novels turned into a movie or television series. Movies and Television has been the most popular entertainment medium for at least fifty years.  An obscure novelist’s career can change overnight when Hollywood comes knocking at their door.  Well, there has always been a contentious relationship between novelists and Hollywood.

Hollywood vs the Author is a book of essays edited by Stephen Jay Schwartz, a former movie/tv executive and screenwriter.  Schwartz has sat on both sides of the relationship and is the correct person to put a book like this one together.

Essays by famed writers like Michael Connelly (of the Bosch series), Jonathan Kellerman, and Tess Gerritsen share their sobering stories about their dealings in Hollywood.  There is a dark side to getting a book turned into a movie or television series and most of the essays pull no punches in that regard.

Also, I like the fact that Schwartz provides a positive outlook in a few of the essays. However, I believe all authors should have their eyes wide open in dealing with Hollywood and a lot of the authors suggest that you should take the money and get out of the way.

Hollywood Vs The Author is a must read for all authors regardless of where they are in their writing career.  And the biggest lesson for me in reading this book is that Intellectual Property is extremely valuable.  Writers have make sure to protect their IP at all costs when dealing with Hollywood.

I found out last night that author Gene Wolfe had died over the weekend. Wolfe has been considered by many in the Science-Fiction and Fantasy Community to be its greatest writer. Many in that community believed his body of work deserved to be mentioned in the same breath with… END_OF_DOCUMENT_TOKEN_TO_BE_REPLACED

There are a lot of writing craft books out there for writers.  I’m sure many of them are useful for fledging writers to get better at their craft of writing fiction.  However, I realize that a certain writing craft book comes into a writer’s life at the right time. The Story Grid by Shawn Coyne… END_OF_DOCUMENT_TOKEN_TO_BE_REPLACED

“Your artist’s journey is unique to you. You alone are on your path. Your job is only to follow it and be true to it. Who knows what heights it may eventually bear you to? You are an artist. Your journey–however humble, however fraught, however beset with thorns and thistles—is part of a noble, cosmic… END_OF_DOCUMENT_TOKEN_TO_BE_REPLACED

Estate Planning is a topic that many people dislike to talk (or even think) about.  That includes the writer of this blog post.  However, Estate Planning is an essential element for personal finances and especially for creative types (like yours truly). I recently heard M.L. Buchman on the Creative Penn Podcast (highly recommended for authors)… END_OF_DOCUMENT_TOKEN_TO_BE_REPLACED

I ran my first 10k race yesterday as of this blog post and I felt I have become a runner officially.  I have spent the past couple of years of running as a way to have another point of connection with my wife.  My wife began running a few years ago and at first I… END_OF_DOCUMENT_TOKEN_TO_BE_REPLACED

This blog post started out as two Facebook posts a few days ago and I decided that I want to expand on those original posts here. I posted my 100th review last week. My book reviews started out as a blog in 2011. I never thought I would have read and posted 100 book reviews.… END_OF_DOCUMENT_TOKEN_TO_BE_REPLACED

I was asked a couple of days ago, “Why do you write?” I have developed a standard answer over the past year. But, I have decided that standard answer has been more on a surface response than going deep. I have told others on several occasions in recent months to find out your why for… END_OF_DOCUMENT_TOKEN_TO_BE_REPLACED

Digital Publishing has spawned the rise of the indie author movement over the past several years.  As a result, there is a lot of books these days about how to become a successful indie author and how to make a living with your writing. However, there are only a few of those books dealing with… END_OF_DOCUMENT_TOKEN_TO_BE_REPLACED

Sometimes, there is a book that sits on your bookshelf for awhile that you have not read for one reason or another. When you walk over to your bookshelf to grab something to read, that book just sits waiting for its turn to be placed in your hands and the pages opened. Finally, you will… END_OF_DOCUMENT_TOKEN_TO_BE_REPLACED