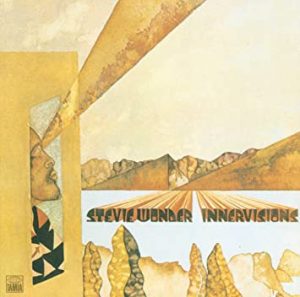 One of the positive attributes of the internet is that you can be sent down a rabbit hole and pique your curiosity unexpectedly.  A few days ago, I went down that aforementioned rabbit hole and wanted to find out more Stevie Wonder’s Classic Period Albums from 1972 to 1976.  Those classic period albums were Music of My Mind, Talking Book, Innervisions, Fulfillingness’ First Finale, & Songs in the Key of Life.

Innervisions was the third of those five classic period albums.  It was released in August 1973, a few months after Stevie’s 23rd birthday. I listened to a podcast with music critic Nelson George discussing why Innervisions was his favorite Stevie Wonder album.  I have to admit that outside of the hits from the album (Too High, Living For the City, & Higher Ground), I had not listened to the entire album.  As a music lover, this was a huge oversight on my part.  I have spent these past few days listening to the entire album. I will state that Innervisions might be Wonder’s greatest musical statement.

The nine songs, forty-five minute album starts with Too High, a trip in psychedelia and ends with He’s Misstra Know-It-All, a sharp critique of President Nixon (and it could apply to former President Trump as well) is an imaginative, sonic landscape that will be a part of my regular music listening from now on.

My favorite song on Innervisions is Don’t Worry Bout A Thing.  This track has an Afro-Cuban inspired flavor and is considered a foundational song for Acid Jazz music. My favorite group, Incognito, does a solid rendition of this song and I can see its influence throughout their music.  Stevie shows his playful side with an opening where he declares he speaks fluent Spanish. And then he gets down to business, creating a danceable song that puts a big smile on my face.

Also, another favorite on the album is Higher Ground.  Most people these days know the solid remake by the Red Hot Chili Peppers. But the original version is the real deal, and I would recommend that music lovers check it out. Visions, Golden Lady, and Jesus Children of America are excellent, well-crafted songs and show the range of Wonder’s musicianship.

I have listened to a lot of Stevie’s music over the years and thought that Songs In the Key of Life was my favorite Stevie album.  Well, I’m going to reconsider that assessment.  Innervisions is a work of art and one of the best albums ever produced by an American musician.