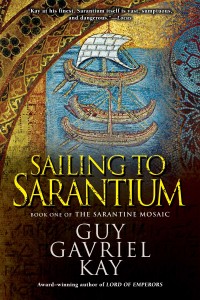 Guy Gavriel Kay is becoming one of my favorite authors and joining a list that includes Jorge Amado, Jonathan Carroll, and Charles de Lint Sailing to Sarantium will be the second Kay novel I have read this year and the third one in the past couple of years.

Sailing to Sarantium is the story of Caius Crispus, known as Crispin.  He is a master mosaicist and has been grieving the deaths of his wife and two daughters. Crispin only lives for his work. However, he has been summoned by a queen to the greatest city in the known world, Sarantium.  Sarantium is a holy city, loved by the poets, and the heart of an empire.

Crispin carries a secret and a queen’s suggestive promise that has him confront legends, magic and danger. He must find his own way to create one of his greatest works in Sarantium. The mosaicist learns such a mission comes with a price. However, his craft could be a saving grace.

Kay writes beautifully and creates a vivid world based on the Byzantine Empire. I was engrossed with Crispin’s journey to Sarantium and looking forward to reading Lord of Emperors, the second half of the Sarantine Mosaic Series.  Sailing to Sarantium will be one of my favorite reads of 2018.  Guy Gavriel Kay is an author I’m looking forward to reading anytime he publishes a novel.