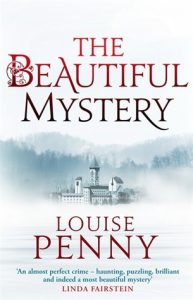 “It’s exactly that. Lillian Dyson murdered, or tried to murder, many people. Not physically, but just as cruelly. By taking away their dreams. Their creations.” “Her weapon was her reviews,” said Normand. “They weren’t just reviews,” agreed Gamache. “Creative people know being reviewed, and sometimes badly, is part of the package. Not pleasant, but a… END_OF_DOCUMENT_TOKEN_TO_BE_REPLACED

One of the pleasures of doing book reviews is getting to discover a new author and escaping into their fictional world. I have been hearing about mystery novelist Louise Penny on the What I Should Read Next podcast by several readers.  Anne Bogel, the host, recommended Penny to several of her podcast guests. I decided… END_OF_DOCUMENT_TOKEN_TO_BE_REPLACED