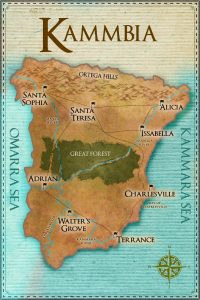 Welcome to a world you’ll want to escape to again and again!

But first, I’d like to ignite your imagination with a whirlwind tour of all things Kammbian.

Look for these things as you read—and absorb more about this fantastic world.

The Lay of the Land

Our hero, Diondray Azur, belongs to the most prominent family in the city of Charlesville, a city south of the Great Forest, next to the Kammara Sea.

He discovers that a sacred book, called the Book of Kammbi, has been left in Charlesville for several generations. Diondray learns the book was left by Oscar Ortega, one of the land’s greatest disciples. Ortega, it seems, wrote a prophecy called Oscar’s Prophecy, declaring that a descendant would someday unite the entire land of Kammbia.

All signs point to Diondray Azur being the one who will fulfill Oscar’s prophecy. However, to do so, Diondray must journey throughout the entire land of Kammbia and unite all its peoples, not an easy task, as you will learn.

The Kammbian experience begins with The Diondray’s Chronicles series. All three are released and should be read together. The series chronicles Diondray Azur’s journey throughout Kammbia as he attempts to fulfill the prophecy mentioned in the sacred Book of Kammbi and unite the land as one.

Book 1 – Diondray’s Discovery: Diondray discovers the Book of Kammbi and learns about Oscar’s prophecy. As a result, he is forced to leave Charlesville and goes to Santa Sophia, a city north of the Great Forest, to begin his journey.

Book 2 – Diondray’s Journey: In this book, Diondray continues his journey to the other three cities north of the Great Forest: Santa Teresa, Alicia, and Issabella. He will learn more about Oscar’s Prophecy and his connection to it.

The Diondray’s Chronicles Series has set up the foundation for the ongoing world of Kammbia.

I have started writing a new series set in Kammbia.  The series is called The Dance and Listen Series and takes place a few years after the events in The Diondray Chronicles Trilogy.  This series will focus on characters that appeared in Diondray’s Roundabout and have their own stories taking place after the events from the Diondray’s Chronicles series. The novels in The Dance and Listen series are standalone novel and can be in any order. I want to expand the scope of Kammbia beyond Diondray Azur and show how his travels have affected everyone in the land.  I have two books planned in the Series.

The Dance and Listen Series:

Book 1– Ciscoe’s Dance: This is the story of dancer Ciscoe Maldonado from the city of Walter’s Grove. Ciscoe made his appearance in Diondray’s Roundabout.  He is preparing to dance at The Festival of Josette, the city’s biggest festival but has been told he can no longer perform at the festival. It is due to his connection to Diondray Azur.  Ciscoe is determined why he has been denied to perform at the city’s biggest festival and learns something about himself that dancing has never given him.   Ciscoe’s Dance is due in the Spring 2021.

Book 2- Cassandra’s Revelation:  This is the story of the greatest female singer in the city of Terrance, Cassandra Applebaum.  Cassandra made an appearance in Diondray’s Roundabout. She is the queen of Kammarice music, an easy listening style of music that is beloved by the people of Terrance.  Cassandra gets a chance to perform in the city of Santa Sophia, in Northern Kammbia.  It is the first time a singer from Southern Kammbia has perform in that city. How will the people of Santa Sophia receive her?   Cassandra’s Revelation is due in the Summer 2022.

Like any new world, Kammbia has some words that might be a bit strange to you at first. To get you acquainted with these words, here’s a brief glossary to help you along as you travel throughout the Kammbian universe.

Kahall: church
Morrim: pastor, teacher
Diakono: elder
Marperia: Plaza located downtown in each city north of the Great Forest
Acts of Passha: Sin or transgression, according to the Kammbian beliefs.
Book of Kammbi: The sacred book for the believers and followers of Kammbi. It was created and published by the Konseho of Kammbi, the council governing all the cities North of the Great Forest.
Themily: A collection of thoughts written on a single sheet paper and read to an audience. Meant to inspire, encourage, or admonish the audience. Diondray Azur writes themilies throughout the entire series.

Guanamamma: A rhythmic, dance based music (similar to Merengue) created by legendary musician Walter Fuente in the city he founded, Walter’s Grove. His backstory is mentioned in Diondray’s Roundabout.

Kammarice:  An easy-listening, elegant based music created in the city of Terrance. The backstory of Kammarice music is mentioned in Diondray’s Roundabout.

I plan to release a full glossary of Kammbian words and a tour guide to this land soon.

This basic overview will give you some insight into the world of Kammbia. I will continue to add more background about the cities, characters, and cultures in future blog posts.